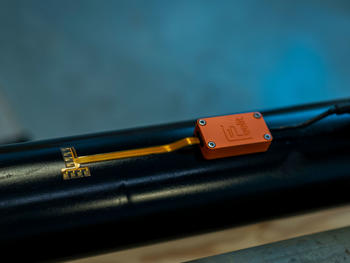 Merck announced the first commercial product from Feelit, based in Haifa, Israel. Feelit is an Industry 4.0 startup that was part of the Merck PMatX innovation lab for next-generation electronics in Israel. RetroFeel™, the company’s first product, combines a wireless edge device and a printed nanotechnology sticker sensor that detects structural changes in mechanical parts and systems and is able to predict upcoming failures. This sensing solution is applicable in process industries such as pharmaceuticals, food and beverage, oil and gas as well as semiconductor manufacturing.

“Our product works – it was found valuable and was checked by Merck, a leading pharmaceutical manufacturer” said Gady Konvalina, CEO of Feelit. “The remote ‘over the shoulder’ installation approach we developed during the Covid-19 crisis also works. With our on-line training and support our customers installed the sensor themselves and then just used it to monitor the production equipment operations and integrity.”

Merck employees, who were the first to apply and use the sensors in production, said: “We use the printed sensors to measure pressure and temperature in processes with sterile or aggressive substances where we want to avoid contact with the process media. In addition, we use Feelit’s sensors in the context of diaphragm valves to identify a failure of the diaphragm before rupturing to avoid chemical or biological spills.”

Having successfully completed two pilot trials using the nanomaterial-based sensors to monitor production equipment, Feelit started sales of its product and is performing additional trials worldwide. The sensors are externally attachable in minutes and easy to connect to software.

Feelit has a multidisciplinary team and works in the industrial Internet of Things field. It provides structural sensing that can turn any object into a smart object. The company has made significant progress since joining the Merck program in Israel, making full use of the facilities, mentoring and commercial co-operation available. Feelit ramped up production of its RetroFeel sensors on the semi-industrial inkjet printer in PMatX. Production was increased from a few sensors per day to hundreds of sensors in one day, making use of the scalability of the printing process. After its first year of operation, Feelit signed a service agreement with the PMAtX innovation lab to continue the production of more sensors for commercial purposes. The company plans to produce thousands of sensors in the next two years with plans to scale up significantly by 2024.

Feelit was the first company to join the PMatX innovation lab in Israel, led by Merck and run by M Ventures. The formation of PMAtX, which focuses on next-generation electronics, was supported by the Technology Innovation Lab program of the Israel Innovation Authority (IIA).

The PMatX innovation lab, located adjacent to the Merck research & development site in Yavne, Israel, is currently hosting two more startups (medication adherence startup Pilltracker and computational imaging startup PxE). Yavne is also home to the Healthcare and Life Science BioIncubator, which has successfully been in place since 2011.