Biofuels and sophisticated materials cycles thanks to bio-templating 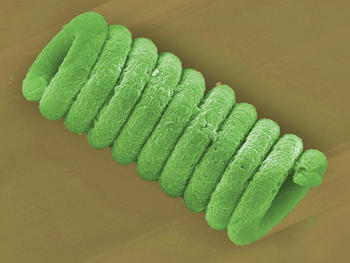 The blue-green Spirulina, whose shape is reminiscent of the coil in a tiny immersion heater, is particularly suitable for biotemplating, as its compact spiral structure contributes to its highly efficient use of sunlight.

Blue-green algae are among the oldest living creatures on Earth and have perfected the use of sunlight over billions of years. Empa scientists have now equipped these humble unicellular organisms with semiconductor coatings to create mini power plants, which supply biofuels and are photocatalytically active in sunlight. And what's best: The chemical reactions are circular – they form a sophisticated raw materials cycle.

They were already bustling around in the "primordial soup" on our planet well over two billion years ago and have been helping to enrich the Earth's atmosphere with oxygen ever since. Nowadays, blue-green algae or – more scientifically – Cyanobacteria are practically omnipresent: in waters, on the bark of trees or on barren mountain tops. They have perfected the efficient use of sunlight for photosynthesis to such an extent that they can survive even in gloomy caves. Empa researchers led by Laetita Philippe from the "Mechanics of Materials and Nanostructures" lab in Thun have now used bio-templating technology to coat the undemanding blue-green algae of the genus Spirulina in such a way that they can be used to produce biofuels and exhibit a photocatalytic effect.

To achieve a highly efficient and at the same time sustainable process, the researchers used the bio-templating method, in which an architecture given by nature serves as a template for applying novel surface coatings. The blue-green algae Spirulina, whose shape is reminiscent of the coil in a tiny immersion heater, was particularly suitable for this, as its compact spiral structure contributes to its highly efficient use of sunlight.

The researchers first coated the approximately four micrometer-thin spiral cords of preserved Spirulina unicellular organisms with a fine layer of nickel. Like the skin of an onion, delicate layers of zinc oxide and zinc sulfide nanoparticles followed. "While the spiral-shaped blue-green algae act as a structuring scaffold, the nickel coating, being magnetic, provides an excellent way of recovering the tiny power plants," says Laetitia Philippe. The subsequent zinc-containing coating has impressive photocatalytic activity. This is because the combination of two zinc compounds leads to a prolonged performance of the photocatalytic reaction.

What's more, a wider wavelength range of the solar spectrum can be used. "With zinc oxide alone, we could only use the sun's UV radiation, for instance for the decomposition of environmental pollutants With the coated algae's photocatalytic activity, it should be possible to develop a sustainable, simple and inexpensive process for water treatment," adds Philippe. Since 2015, the availability and sustainable management of water for all has been part of the United Nations (UN) Global Sustainability Agenda. In line with this goal, the Empa team looked for a technology that could produce clean water worldwide on the basis of existing purification plants. The main objective was to remove from water microplastic and persistent organic pollutants (POPs), which conventional treatment systems do not remove. The researchers thus developed a process based on photocatalysis using zinc oxide and zinc sulfide, a chemical reaction that oxidizes and neutralizes pollutants when exposed to light. The combination with zinc sulfide nanoparticles makes it even possible to not only tap UV radiation as an energy source but also the visible part of the electromagnetic spectrum.

The researchers initially developed the new photocatalytic coating on the basis of other structures reminiscent of microscopic forests of fern plants. "The fern architecture is another way of absorbing light energy as efficiently as possible," explains Serrá. In laboratory experiments with artificially produced micro- and nanoferns made of various chemical compounds, the onion-layer structure of zinc oxide, zinc sulfide and nickel proved to be particularly efficient. What's more, the bio-templating process of blue-green algae was intended to avoid the shading caused by individual branches within the microferns, thus additionally increasing light absorption.

A further advantage: The blue-green algae multiply virtually by themselves. With only water, sunlight and fertilizer, the unicellular organisms grow into large quantities at a rapid pace. And they not only consume carbon dioxide (CO2) from the environment and emit valuable oxygen as "waste gas" – the CO2 balance of the method can be further improved by adding extra CO2 to the algae culture.

However, once the tiny immersion heaters have been put to work and decomposed pollutants in the wastewater, their task is far from over. While the zinc and nickel compounds can be recovered and reused, the preserved Spirulina structures remain as mini power plants. "Biofuels can be produced from the biomass," says Laetitia Philippe. In addition to yielding bioethanol and biodiesel, the Spirulina remains can also be processed and burned as pellets for energy production. And the ashes can eventually be used as fertilizer for the cultivation of new blue-green algae. The sophisticated raw materials cycle has now been demonstrated in lab experiments. But Laetitia Philippe is confident that the versatile single-cell organisms can be applied on a larger scale.