Catalyst Material from the Laser Lab 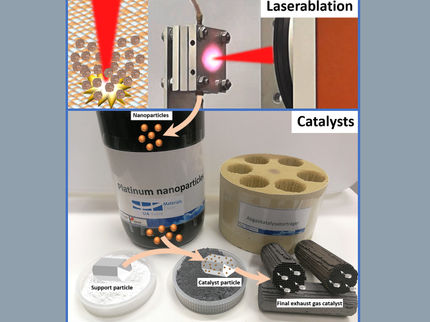 From particle production to the final catalyst (schematic diagram).

In catalysts, more surface area usually equals more activity. And hardly anything offers more surface than structures made of nanoparticles. Scientists from the Center for Nanointegration (CENIDE) at the UDE have shown that it makes sense in economic terms to produce catalytically highly active particles by laser. Not only are they extremely pure, but even at low temperatures they are more efficient than their conventionally produced counterparts. This has been demonstrated in tests conducted by an industrial partner.

Exhaust gases from the diesel engine usually pass a catalytic converter consisting of platinum and palladium particles on an alumina carrier. The particles are smaller than 10 nanometers in diameter and have so far mainly been produced in a wet-chemical process, i.e. in a multi-step process that has to be optimized for each composition. Tests with new materials are therefore time-consuming and expensive.

Laser ablation, on the other hand, makes it possible to produce highly pure nanoparticles from a solid in one step. In this process, a laser vaporizes material from the surface of a platelet with ultra-short pulses. The platelet is made of the selected raw material and lies in a liquid. The fragments then assemble into nanoparticles. That's it.

The former disadvantage of the method: Until now, the output of the desired particle size was limited. But Dr. Sven Reichenberger from Technical Chemistry I and his team found a solution: "We placed the focus point of the laser slightly above the platinum-palladium plate in the solution." In this way, more than one gram per hour in the desired size can be produced selectively. The scientists who work at the NanoEnergieTechnikZentrum (NETZ) have thus exceeded the decisive limit where the laser method is more economical than thewet chemical method due to the low running costs. The trade magazine "Nanomaterials" covers this in its current issue.

Better Performance Even at Lower Temperatures

Umicore as industrial partner has tested the resulting particles under realistic conditions: Even at low temperatures the catalyst shows a much higher activity than the classic product. Moreover, it converts carbon monoxide equally well and nitrogen oxides even better into ecologically safe products.

"This was our milestone to prove the industrial relevance of the method," says Reichenberger. "Now we will test further materials."