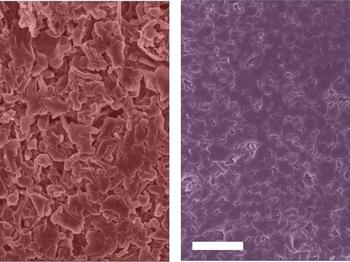 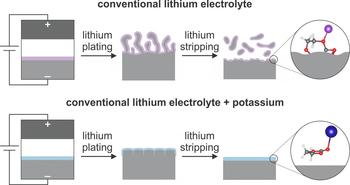 The team used nuclear magnetic resonance imaging and computer simulations to better understand the reactivity and structure of molecules on the surface of lithium metal anodes that could lead to improved performance.

Electric vehicles (EVs) hold great promise for our energy-efficient, sustainable future but among their limitations is the lack of a long-lasting, high energy density battery that reduces the need to fuel up on long-haul trips. The same is true for houses during blackouts and power grid failures--small, efficient batteries able to power a home for more than one night without electricity don't yet exist. Next-generation lithium batteries that offer lightweight, long-lasting, and low-cost energy storage could revolutionize the industry but there have been a host of challenges that have prevented successful commercialization.

A major issue is that while rechargeable lithium metal anodes play a key role in how well this new wave of lithium batteries function, during battery operation they are highly susceptible to the growth of dendrites, microstructures that can lead to dangerous short-circuiting, catching on fire, and even exploding.

Researchers at Columbia Engineering report that they have found that alkali metal additives, such as potassium ions, can prevent lithium microstructure proliferation during battery use. They used a combination of microscopy, nuclear magnetic resonance (similar to an MRI), and computational modeling to discover that adding small amounts of potassium salt to a conventional lithium battery electrolyte produces unique chemistry at the lithium/electrolyte interface.

Her team's discovery that alkali metal additives suppress the growth of non-conductive compounds on the surface of lithium metal differs from traditional electrolyte manipulation approaches, which have focused on depositing conductive polymers on the metal's surface. The work is one of the first in-depth characterizations of the surface chemistry of lithium metal using NMR, and demonstrates the power of this technique to design new electrolytes for lithium metal. Marbella's results were complemented with density functional theory (DFT) calculations performed by collaborators in the Viswanathan group in mechanical engineering at Carnegie Mellon University.

The team is now testing alkali metal additives that stop the formation of deleterious surface layers in combination with more traditional additives that encourage the growth of conductive layers on lithium metal. They are also actively using NMR to directly measure the rate of lithium transport through this layer.