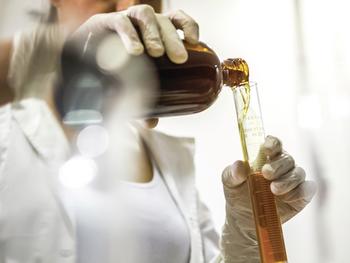 Photo by Bee Naturalles on Unsplash

In their paper published in Nature Catalysis, Professor Francesca Paradisi and Dr. Martina Contente of the University of Nottingham and the University of Bern show a new method to produce chemical molecules more efficiently through a new one step reaction in the enzyme.

Professor Paradis is Professor of Biocatalysis in the School of Chemistry in Nottingham and Professor of Pharmaceutical Chemistry at the University of Bern, she explains: "We have demonstrated how a very simple mutation in one of the key residues of a useful enzyme has dramatically expanded its synthetic scope, enabling the use of the mutant variant in the preparation of challenging chemical molecules, as well as natural metabolites that are vital in many biological processes in the body."

Any textbook on enzymes will report on how the catalytic amino acids in any given enzyme family are highly conserved, they are in fact a signature of the type of chemistry an enzyme can do. Variations do occur and in some cases, if the replacing amino acid is similar, both can be found in significant proportion in Nature, but others can be much less common and are found only in a limited number of species.

"In this study we have explored an untouched area of enzyme engineering and modified the a key catalytic residue in the active site of an enzyme" adds Professor Paradisi, "Previously it was thought that doing this would cause a loss of activity of the enzyme but we have found this is not the case when this biocatalyst is used in a synthetic direction and in fact challenging but very useful molecules can now be made under mild conditions which could be easily scaled up and replicated commercially for use in a wide range of products."

To change the substrate scope of an enzyme the approach has generally been to mutate the residues involved in substrate recognition, whether through rational design or directed evolution, leaving always untouched the catalytic ones.

The mutant variant of an acyl transferase enzyme was rapidly created and while the native biocatalyst would work with alcohols and linear amines, the mutant work with thiols and much more complex amines too. The research demonstrated that indeed the new variant has lost the ability to hydrolyse esters, but for synthetic applications, where an ester or other functional groups need to be made (thioesters and amides) and not cleaved, this is in fact a major advantage.

Dr Martina Contente adds: "We have had fantastic feedback on this study from the scientific community as it is providing a new tool for chemistry that can be applied to a wide range of molecular reactions. The fact that it is a very stable reaction created without the need for specific conditions mean it has the potential for a low cost commercial application in the production of new pharmaceuticals. We believe we have unlocked a new combination in the catalytic triads which nature seem to have disfavoured, possibly to tighten the control on reactivity, but that for a chemist could be a real goldmine."