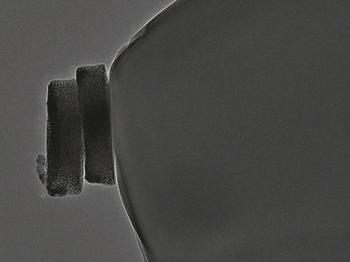 Analyzing nanoparticles individually is a challenge precisely because they are so small. A new technique using electron microscopy and a robotic arm could make the process much easier.

Precious metal-free nanoparticles could serve as powerful catalysts in the future, for example for hydrogen production. To optimize them, researchers must be able to analyze the properties of individual particles. A new method for this has been suggested by a team from the Center for Electrochemistry at Ruhr-Universität Bochum (RUB) and the Institute of Inorganic Chemistry at the University of Duisburg-Essen (UDE). The group developed a method using a robotic arm that allows them to select individual particles under an electron microscope and place them on a nanoelectrode for electrochemical analysis. The method is described in the journal Angewandte Chemie, published online in advance 19 November 2020.

Using a robotic arm to deposit nanoparticles onto electrode

For the studies, the scientists used hexagon-shaped particles of cobalt oxide with diameters of 180 to 300 nanometers, which the Duisburg-Essen team consisting of Professor Stephan Schulz and Sascha Saddeler had synthesized. In the experiment, the particles catalyzed the so-called oxygen evolution reaction. During the electrolysis of water, hydrogen and oxygen are formed, with the limiting step in this process currently being the partial reaction in which the oxygen is formed. More efficient catalysts for the oxygen evolution reaction would simplify the efficiency for electrochemical water splitting under formation of hydrogen. Nanoparticle catalysts are supposed to help with this. Since their catalytic activity often depends on their size or shape, it is important to understand the properties of individual particles in order to find the optimal catalysts.

The Bochum team consisting of Thomas Quast, Dr. Harshitha Barike Aiyappa, Dr. Patrick Wilde, Dr. Yen-Ting Chen and Professor Wolfgang Schuhmann analyzed selected cobalt oxide particles first microscopically, then electrochemically. “Using a movable robotic arm, we can pick out individual nanoparticles under the electron microscope,” Schuhmann explains. “The selected particle, which we then already know microscopically, we place on a tiny electrode to test what it can do as a catalyst.” The researchers then use electrochemical methods to measure its catalytic activity for the oxygen evolution reaction.

In this way, the chemists analyzed several individual particles. Since they knew the size and crystal orientation of a particle, they were able to relate the catalytic activity to the number of cobalt atoms. “Here, the particles showed remarkably high activities in the oxygen evolution reaction, and the measured current densities exceeded commercially available alkaline electrolyzers by more than 20 times,” says Stephan Schulz.

“We believe that by applying the proposed methodology, single particle analysis of catalyst materials has finally reached the point of reliable and comparatively simple sample preparation and characterization, which are crucial for establishing structure-function relationships,” the authors write in conclusion.