A massive advance in spectrometry 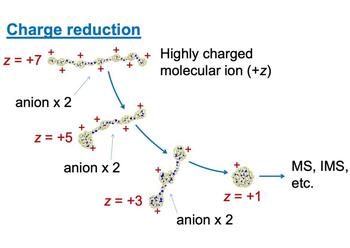 A depiction of charge reduction process which is utilized as a pre-treatment process of mass spectrometry, MS (or ion mobility spectrometry, IMS). To increase the accuracy of spectrum, excess charges on the molecular ion (PEG in this figure) is removed via collision with anion in gas. 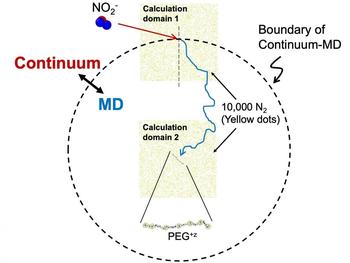 An outline of developed calculation model (continuum - molecular dynamics simulation hybrid method). In this model, when inter-ion distance is sufficiently far, relative motion is described by diffusion equations (continuum), meanwhile within a specific distance (written in broken line), molecular dynamics (MD) simulations are utilized to calculate the trajectory. In order to increase calculation cost. we perform MD simulation with arranging gas molecules only around target ions. 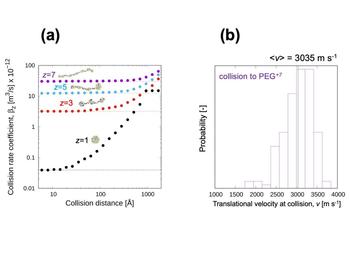 (a) The recombination (collision) rate coefficient of PEG ion with different number of charges. This collision rate coefficient showed good agreement with experimentally measured charge reduction rate. (b) Translational velocity distribution of NO2- ion at collision. We expect the kinetic energy can be used to evaluate the possibility of collision induced reaction.

Mass spectrometers (MS) have become essential tools in chemistry and biology laboratories. The ability to quickly identify the chemical components in a sample allows them to take part in a diverse array of experiments, including radiocarbon dating, protein analysis, and monitoring drug metabolism.

MS instruments work by giving the analyte molecules an electric charge, and shooting them through a region of space with a uniform electric field, which curves their trajectory into a circle. The radius of the circle, which depends on the ratio of the molecule's mass to its charge, is detected and compared with known samples. Because the method can only measure this ratio, not the mass itself, excess charges can lead to inaccurate or ambiguous results.

Now, a team of researchers lead by Kanazawa University used a powerful molecular dynamics simulation to better understand the effect of excess charges on molecules tested by a MS. They modeled the effect of adding molecules of the opposite charge in order to neutralize excess charge. In this case, the positive charge on polyethylene glycol (PEG) can be reduced via collision with negatively charged NO2- ions.

However, this is complicated by the fact that the likelihood of colliding depends on the amount of charge in the first place. "Charged polymers can adopt charge-state dependent structures because of electrostatic stretching," first author Tomoya Tamadate says. For example, with small excess charge, PEG assumes a compact form. However, as the charge increased, the mutual repulsion between the positive charges causes it to straighten out.

To help speed up the calculations, the team used the "continuum approximation" method, which only started simulating all of the atoms in the NO2- molecule once it approached close enough to the PEG.

"The success of this project shows that hybrid continuum-molecular dynamics simulations can be used more generally to study collision-driven reactions molecules that can take on different conformations," senior author Takafumi Seto says. The results can lead to more effective methods of controlling excess charge in sample molecules, which will allow for more accurate results.