Scientists experimentally realize 2D Si-Ge alloys with tunable electronic properties, getting us closer to a breakthrough in modern electronics 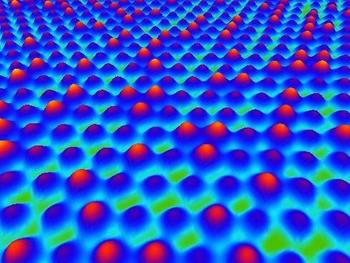 Scanning tunneling microscopy image of a Si-Ge alloy with a composition of Si5.67Ge0.33. Tall protrusions correspond to Ge atoms and short ones to Si atoms. The distance between protrusions is only 0.64 nm.

Semiconducting 2D alloys could be key to overcoming the technical limitations of modern electronics. Although 2D Si-Ge alloys would have interesting properties for this purpose, they were only predicted theoretically. Now, scientists from Japan Advanced Institute of Science and Technology have realized the first experimental demonstration. They have also shown that the Si to Ge ratio can be adjusted to fine tune the electronic properties of the alloys, paving the way for novel applications.

Alloys--materials composed of a combination of different elements or compounds--have played a crucial role in the technological development of humans since the Bronze Age. Today, alloying materials with similar structures and compatible elements is essential because it enables us to fine tune the properties of the final alloy to match our needs.

The versatility provided by alloying naturally extends to the field of electronics. Semiconductor alloys are an area of active research because new materials will be needed to redesign the building blocks of electronic devices (transistors); in this regard, two-dimensional (2D) semiconductor alloys are seen as a promising option to go past the technical limitations of modern electronics. Unfortunately, graphene, the carbon-based poster child for 2D materials, does not lend itself easily to alloying, which leaves it out of the equation.

However, there is an attractive alternative: silicene. This material is composed entirely of silicon (Si) atoms arranged in a 2D honeycomb-like structure reminiscent of graphene. If the properties of silicene could be tuned as needed, the field of 2D silicon-based nanoelectronics would take off. Although alloying silicene with germanium (Ge) was theoretically predicted to yield stable 2D structures with properties tunable by the Si to Ge ratio, this was never realized in practice.

Now, a team of scientists from Japan Advanced Institute of Science and Technology (JAIST) have experimentally demonstrated a new way to grow a silicene layer and stably replace a portion of its atoms with Ge, allowing them to fine tune some of its electrical properties.

Their study is published in Physical Review Materials.

First, the scientists grew a single layer of 2D silicene onto a zirconium diboride (ZrB2) thin film grown on a silicon substrate through the surface segregation of Si atoms which crystallize in a 2D honeycomb-like structure. However, this silicene layer was not perfectly flat; one sixth of all Si atoms were a bit higher than the rest, forming periodic bumps or 'protrusions.'

Then, Ge atoms were deposited onto the silicene layer in ultrahigh vacuum conditions. Interestingly, both theoretical calculations and experimental observations through microscopy and spectroscopy revealed that Ge atoms could only replace the protruding Si atoms. By adjusting the number of Ge atoms deposited, a Si-Ge alloy with a desired Si to Ge ratio could be produced. The composition of the final material would thus be Si6-xGex, where x can be any number between 0 and 1.

The team then studied the effects of this adjustable Si to Ge ratio on the electronic properties of the Si-Ge alloy. They found that its electronic band structure, one of the most important characteristics of a semiconductor, could be adjusted within a specific range by manipulating the composition of the material. Excited about the results, Senior Lecturer Antoine Fleurence from JAIST, lead author of the study, remarks, "Silicon and germanium are elements commonly used in the semiconductor industry, and we showed that it is possible to engineer the band structure of 2D Si-Ge alloys in a way reminiscent of that for bulk (3D) Si-Ge alloys used in various applications."

The implications of this study are important for multiple reasons. First, the ultimate thinness and flexibility of 2D materials is appealing for many applications because it means they could be more easily integrated in devices for daily life. Second, the results could pave the way to a breakthrough in electronics. Co-author of the study, Professor Yukiko Yamada-Takamura from JAIST, explains, "Semiconducting 2D materials made of silicon and germanium with atomically-precise thickness could further decrease the dimensions of the elemental bricks of electronic devices. This would represent a technological milestone for silicon-based nanotechnologies."

Overall, this study showcases but a few of the advantages of alloying as a way to produce materials with more desirable properties than those made from a single element or compound. Let us hope semiconducting 2D alloys are further refined so that they can take the spotlight in next-generation electronic devices.