2D materials have triggered a boom in materials research. Now it turns out that exciting effects occur when two such layered materials are stacked and slightly twisted 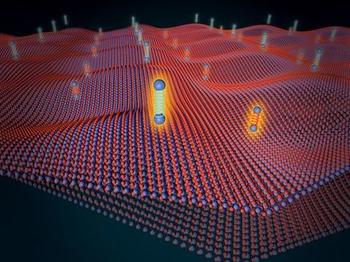 The discovery of the material graphene, which consists of only one layer of carbon atoms, was the starting signal for a global race: Today, so-called "2D materials" are produced, made of different types of atoms. Atomically thin layers that often have very special material properties not found in conventional, thicker materials.

Now another chapter is being added to this field of research: If two such 2D layers are stacked at the right angle, even more new possibilities arise. The way in which the atoms of the two layers interact creates intricate geometric patterns, and these patterns have a decisive impact on the material properties, as a research team from TU Wien and the University of Texas (Austin) has now been able to show. Phonons - the lattice vibrations of the atoms - are significantly influenced by the angle at which the two material layers are placed on top of each other. Thus, with tiny rotations of such a layer, one can significantly change the material properties.

The basic idea can be tried out at home with two fly screen sheets - or with any other regular meshes that can be placed on top of each other: If both grids are perfectly congruent on top of each other, you can hardly tell from above whether it is one or two grids. The regularity of the structure has not changed.

But if you now turn one of the grids by a small angle, there are places where the gridpoints of the meshes roughly match, and other places where they do not. This way, interesting patterns emerge – that is the well-known moiré effect.

"You can do exactly the same thing with the atomic lattices of two material layers," says Dr. Lukas Linhart from the Institute for Theoretical Physics at TU Wien. The remarkable thing is that this can dramatically change certain material properties - for example, graphene becomes a superconductor if two layers of this material are combined in the right way.

"We studied layers of molybdenum disulphide, which, along with graphene, is probably one of the most important 2D materials," says Prof Florian Libisch, who led the project at TU Wien.  "If you put two layers of this material on top of each other, so-called Van der Waals forces occur between the atoms of these two layers. These are relatively weak forces, but they are strong enough to completely change the behaviour of the entire system."

In elaborate computer simulations, the research team analysed the quantum mechanical state of the new bilayer structure caused by these weak additional forces, and how this affects the vibrations of the atoms in the two layers.

The angle of rotation matters

"If you twist the two layers a little bit against each other, the Van der Waals forces cause the atoms of both layers to change their positions a little bit," says Dr Jiamin Quan, from UT Texas in Austin. He led the experiments in Texas, which confirmed the results of the calculations: The angle of rotation can be used to adjust which atomic vibrations are physically possible in the material.

"In terms of materials science, it is an important thing to have control over phonon vibrations in this way," says Lukas Linhart "The fact that electronic properties of a 2D material can be changed by joining two layers together was already known before. But the fact that the mechanical oscillations in the material can also be controlled by this now opens up new possibilities for us. Phonons and electromagnetic properties are closely related. Via the vibrations in the material, one can therefore intervene in important many-body effects in a controlling way." After this first description of the effect for phonons, the researchers are now trying to describe phonons and electrons combined, hoping to learn more about important phenomena like superconductivity.

The material-physical Moiré effect thus makes the already rich research field of 2D materials even richer - and increases the chances of continuing to find new layered materials with previously unattainable properties and enables the use of 2D materials as an experimental platform for quite fundamental properties of solids.