Honouring the inventor who brought organic semiconductors to light 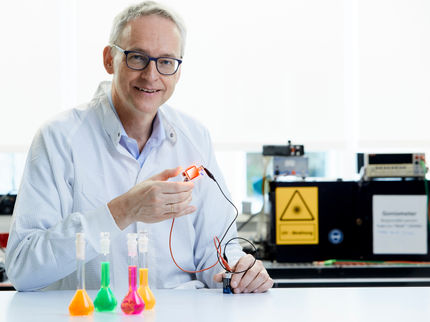 The European Patent Office (EPO) announces that German scientist, professor and entrepreneur Karl Leo has been nominated as a finalist in the "Lifetime achievement" category of the European Inventor Award 2021. Leo's pioneering work with organic semiconductors led to the development of highly-efficient organic light-emitting diode (OLED) display technology. The full impact of Leo's innovations can be seen across the electronics industry, with OLEDs providing enhanced image brightness, colour resolution and power efficiency in the latest models of smartphones and other electronic devices we use every day.

Leo, an internationally renowned physicist, is also an entrepreneur who, over the course of his career to date, has co-founded numerous start-ups in Germany's ‘Silicon Saxony' tech region. He has channelled his research breakthroughs into commercially successful electronics and photovoltaics businesses and his achievements in the field of organic semiconductors have even earned him the nickname Organik Papst - the ‘Pope of Organics'.

"Throughout his prolific career, Karl Leo's ingenuity and business acumen have driven him to develop powerful technology that, today, is used by millions of people worldwide," says EPO President António Campinos, announcing the European Inventor Award 2021 finalists. "His effective use of intellectual property rights has supported him, enabling Leo to found companies and commercialise inventions across multiple sectors."

The winners of the 2021 edition of the EPO's annual innovation prize will be announced at a ceremony starting at 19:00 CEST on 17 June which has this year been reimagined as a digital event for a global audience.

As a self-professed basic researcher, Leo's work stems from a fundamental curiosity that is nevertheless grounded in practical applications. This passion began at a young age when Leo's affinity for repairing electronics earned him the nickname ‘the technician' among family members. His early fascination with household electronics later ignited his interest in semiconductors, which became the focus of his undergraduate thesis on solar cells at Freiburg's Fraunhofer Institute for Solar Energy Systems ISE in 1985. His first exploration of semiconductors motivated him to think about how electronic devices could be improved through the unique properties of semiconductors - such as the ability of diodes to pass current more easily in one direction.

Leo noticed that few people had considered ‘doping' for organic semiconductors - adding tiny amounts of substances that produce freely moving electrons to boost a material's conductivity. Doping was already a common technique to increase the conductivity of inorganic semiconductors, for example, by adding traces of boron, arsenic, phosphorus or gallium to silicon wafers. Leo and his research group set out to see if this technique could also apply to organic semiconductors. They took basic organic semiconductor materials, such as lithium phthalocyanine-containing compounds (used for the blue colour on German autobahn signs) and added small organic molecules with electron-withdrawing properties such as bathophenanthroline. Using a vacuum evaporation process, the researchers then heated the base materials (in a powder form) until they evaporated, resulting in condensed semiconductor films.

The breakthrough came in 1998, when the highly talented PhD students Martin Pfeiffer and Jan Blochwitz in his team were able to create an organic semiconductor LED requiring only one-fifth of the voltage previously needed. Leo's organic semiconductors were more sustainable than inorganic semiconductors due to their high efficiency, long lifespan, low-energy production process and potential to be recycled. Motivated by these initial outcomes, Leo's team worked to refine the process even further. "We discovered that it was possible to raise the conductivity of organic semiconductors by a factor of one million or more, in some cases. We also realised that it could be used for devices, organic light-emitting diodes, solar cells, transistors and more," says Leo.

Leo's work has always been fuelled by a passion for research and an innate curiosity. His successes have also depended on an entrepreneurial spirit. Over the course of his career to date, Leo has co-founded numerous start-ups in Germany's ‘Silicon Saxony' tech region. He recognises the value of IP protection in this process, noting that "no investor will invest in a technology company without a solid intellectual property base".

In 2001, for example, Leo co-founded the German start-up company Novaled AG® to commercialise OLED technologies and materials. Leo was named in a patent application filed by Novaled for a transparent, thermally stable and easy-to-produce OLED with unmatched power efficiency, and the European patent was granted in 2006. This European patent laid the basis for Novaled's PIN OLED® technology, which was introduced in flat-screen displays and OLED lighting with double the efficiency of any competitor on the market. Leo's PIN OLEDs eventually attracted Samsung, which acquired Novaled in 2013 for EUR 260 million.

In 2004, Leo, his team of researchers, and the University of Ulm began adapting the semiconductors to organic solar cells, hoping to bring similar success to this field. In 2006, they filed a patent application in the name of Heliatek GmbH®. Leo is co-founder of the solar technology spin-off which has created the world's first industrial-grade ultra-light, sustainable and flexible organic solar film that can be mounted on buildings that cannot physically or legally carry conventional solar modules.

The organic semiconductor field-form transistors Leo hopes to bring to market next could have many practical applications for electronic circuits in displays, solar energy and even bioelectronics. As a professor and business co-founder, the 60-year-old has never stopped striving to advance the field of organic semiconductors. "I see opportunities beyond what has been achieved today," he says.