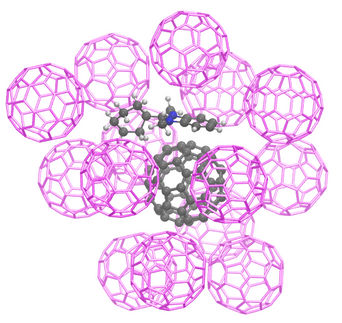 A group of physicists from the cfaed at TU Dresden, together with researchers from Japan, were able to demonstrate in a study how the doping of organic semiconductors can be simulated and experimentally verified.

In semiconductor technology, doping refers to the intentional introduction of impurities (also known as dopants) into a layer or into the intrinsic semiconductor of an integrated circuit. These dopants are deliberate modifications of the semiconductor, with which the behavior of the electrons and thus the electrical conductivity of the intrinsic material can be controlled. Even the smallest amounts of dopants can have a strong impact on the electrical conductivity. Electronic modifications by doping make semiconductors functional in all major electronic devices – the backbone of the electronics industry.

Although the principle of doping of conventional semiconductors was described in 1950 by the US physicist John Robert Woodyard, there is still discussion about this processes in organic semiconductors. This is because both the dopants and the semiconductor material consist of molecules and the doping efficiency is affected by various effects that are not yet well understood.

A group of physicists from the TU Dresden around the cfaed independent research group leader Dr. Frank Ortmann (Computational Nanoelectronics Group) was able to show how different doping properties can be simulated and subsequently experimentally verified. For this purpose, the density of states and the Fermi level position of the prototypic materials C60 and zinc phthalocyanine (ZnPc), which were n-doped with highly efficient benzimidazoline radicals (2-Cyc-DMBI), were simulated and experimentally determined by direct and inverse photoemission spectroscopy. This collaboration work with researchers from Japan and cfaed investigators Prof. Karl Leo (Chair of Opto-Electronics) und Prof. Gianaurelio Cuniberti (Chair of Material Science and Nanotechnology) from TU Dresden has now been published in the journal "Nature Materials".

The scientists investigate the role of electronic band gap states that are created on doping. In particular, they identified the energetic difference Δ between the electron affinity of the undoped molecule and the ionization potential of its doped counterpart (in the vicinity of dopants) as a key parameter for efficient doping. “This parameter is critical for the generation of free charge carriers and thus influences the conductivity of the doped films,” said Ortmann. “Strategies for optimizing the electronic properties of organic semiconductors can be studied and characterized by changes in the value of Δ.”