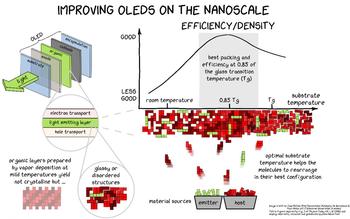 This is a graphic about improving OLEDS on the nanoscale.

Now researchers from the Universitat Autònoma de Barcelona and Technische Universität Dresden demonstrate the possibility of using ultrastable film formation to improve the performance of state-of-the-art OLEDs. The researchers show in a detailed study significant increases of efficiency and operational stability (> 15% for both parameters and all cases, significantly higher for individual samples) are achieved for four different phosphorescent emitters. To achieve these results, the emission layers of the respective OLEDs were grown as ultrastable glasses - a growth condition that allows for thermodynamically most stable amorphous solids.

This finding is significant, because it is an optimization which does neither involve a change of materials used nor changes to the device architecture. Both are the typical levers for improvements in the field of OLEDs. This concept can universally be explored in every given specific OLED stack, which will be equally appreciated by leading industry. This in particular includes thermally activated delayed fluorescence (TADF) OLEDs, which see a tremendous research and development interest at the moment. Furthermore, the improvements that, as shown by the researchers, can be tracked back to differences on the exciton dynamics on the nanoscale suggest that also other fundamental properties of organic semiconductors (e.g. transport, charge separation, energy transfer) can be equally affected.