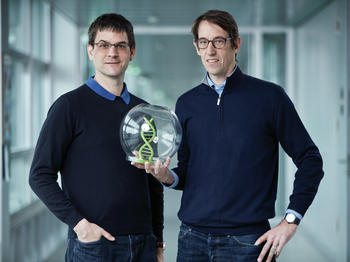 Inspired by fossils, data is encoded into DNA format and encased within tiny glass spheres that protect it from decay caused by the elements over time. Invention currently used to trace product origin throughout supply chains and as a data storage medium, has the potential to protect information for millennia

The European Patent Office (EPO) announces that the Austrian and Swiss researchers Robert N. Grass and Wendelin Stark have been nominated as finalists in the "Research" category of the European Inventor Award 2021 for their invention of glass-encapsulated DNA data storage. The invention provides a novel method of preserving data converted into genetic code using artificial fossilisation with tiny glass spheres.

Grass and Stark, chemical engineering professors at ETH Zurich (Swiss Federal Institute of Technology in Zurich) overcame the challenges of storing data on synthetic DNA. By developing a way to encapsulate data in DNA inside tiny glass spheres - and recover it without error - they created a storage format with the potential to protect valuable data for millennia, as well as a robust DNA barcode for supply chain use.

"Grass and Stark demonstrate that an innovative, cross-disciplinary approach can produce technological advancements with potential benefits for many future generations to come, especially in light of the increasing digitalisation of every aspect of society," says EPO President António Campinos, announcing the European Inventor Award 2021 finalists. "With patent protection, they turned their research into a business with real-world applications".

The winners of the 2021 edition of the EPO's annual innovation prize will be announced at a ceremony starting at 19:00 CEST on 17 June, which has this year been reimagined as a digital event for a global audience.

Humanity is generating data at an astounding rate but much of this is either stored on hard drives and servers, which have finite lifetimes rarely extending beyond a decade, or on magnetic tape or even floppy disk, which start to decay and degrade after 20 years. Grass and Stark's invention paves the way for long-term data storage that overcomes this impermanence by mimicking the DNA-storing capabilities of fossils.

The two met in 2004 after Stark was appointed Assistant Professor at the ETH Zurich's Department of Chemistry and Applied Biosciences. That same year, Grass joined as one of Stark's first PhD students. They shared one trait in particular: an engineering mindset that drove them to research and build new technologies that translate medical or biology-focused technologies into practical inventions in other fields.

DNA writing (synthesis) and reading (sequencing) was one such area that captured their attention, specifically the idea that DNA - in addition to storing the genetic information of every living creature - could be used as a means of preserving data. This is done by converting digital data (a series of zeros and ones) into a corresponding sequence of the four DNA base pairs. While DNA data storage had already been proved possible by other scientists, including US geneticist George Church in 2012, one obstacle to this method remained: unprotected DNA strands soon chemically degrade after exposure to water, air and heat. They found inspiration for a solution in fossils, where DNA is preserved for hundreds of thousands of years. "The challenge was clear; make DNA stable," explains Grass. "Fossils proved to be the way to go, so we studied the chemical structure of glass precipitates on DNA, which eventually led us to the encapsulation technology."

In 2012, Grass's team (under Stark's guidance) recreated this protective effect by sealing synthetic DNA inside glass particles with diameters up to 10 000 times thinner than a sheet of paper. Once the desired data is converted into DNA - using a synthesis technique that includes error-correction coding from fellow ETH Zurich scientist Dr Reinhard Heckel, thereby making up for DNA damage and data loss - this DNA is encapsulated in glass particles. Although these non-porous "glass fossils" protect the DNA from most corrosive agents and temperature damage, the DNA can be easily recovered and read by treating the particles with a fluoride solution that can dissolve glass, but which does not harm the information. Using this method, Grass's team was able to achieve error-free data recovery after a week's storage at 70°C - a period at increased temperatures which is the environmental exposure equivalent of 2 000 years of storage in average central Europe temperatures.

With proof that their technology worked, ETH Zurich filed a European patent application for Grass and Stark's invention which was granted in 2018.

Imagining a world written in DNA

Grass and Stark took their concept from research to reality by commercialising it through the ETH spin-off company Haelixa AG, established in 2016. The company is one of several ETH spin-offs co-founded by the researchers, who see them as an excellent way to bring patented inventions to market. "If you want to make a company and get investment from a university or funding agency, you have to have a very compelling story about your intellectual property protection," says Grass. "This is why patent applications are an extremely important step."

Haelixa's glass fossils have proved to be highly useful as a robust barcode for tracking purposes - the miniscule DNA-containing particles are applied to a product or substance and later retrieved for verification. The technique has been used to trace underground water flow and verify products in supply chains, such as organic cotton and conflict-free gemstones that have been sourced from suppliers with certified ethical extraction practices.

The potential of Grass and Stark's invention as data storage is also gaining impetus as it becomes possible to store greater quantities of data. In 2018, to promote the technology, the album ‘Mezzanine' by Massive Attack was re-released on DNA format by the researchers encoding a 15 MB data file into strands of synthetic DNA. The technique gained further publicity in 2020, when the first episode of the Netflix series "Biohackers" - a 100 MB video file - was successfully stored on DNA.  The high cost of writing synthetic DNA largely limits its use currently, but Grass and Stark are working to cut costs by simplifying DNA synthesis equipment. Grass is confident new technology will make it possible to access megabytes of DNA storage for only a few euros in the coming years, making it ideal for securely storing valuable information.

With this aim in mind, the inventors continue their research. "We envision a world not too far down the road where reading DNA is really accessible in everyday technology," says Grass. "If you take the world we work in, reading and writing DNA is like taking pen to paper - a much more commonplace medium for people to interact with."