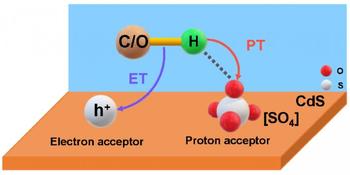 Schematic mechanism of the photoinduced PCET process over [SO4]/CdS

Photocatalytic biomass conversion is an ideal way of generating syngas (H2 and CO) via C-C bond cleavage, which is initiated by hydrogen abstraction of O/C-H bond. However, the lack of efficient electron-proton transfer limits its efficiency. Conversional gasification of biomass into syngas needs to be operated at high temperature (400-700 °C).

Recently, a group led by Prof. WANG Feng from the Dalian Institute of Chemical Physics (DICP) of the Chinese Academy of Sciences (CAS), in collaboration with Prof. WANG Min from Dalian University of Technology, proposed a new method to realize photocatalytic conversion of biopolyols to syngas at room temperature with high efficiency.

The researchers prepared surface sulfate ions modified CdS catalyst ([SO4]/CdS), which could simultaneously increase both the electron and proton transfer, thereby facilitating the generation of syngas mixture from biopolyols with high activity and selectivity.

In situ characterizations combined with theoretical calculations demonstrated that the surface sulfate ion [SO4] was bifunctional, serving as the proton acceptor to promote proton transfer, and increasing the oxidation potential of the valence band to enhance electron transfer.

This study reveals the pivotal effect of surface sulfate ion on electron-proton transfer in photocatalysis and provides a facile method for increasing photocatalytic efficiency.