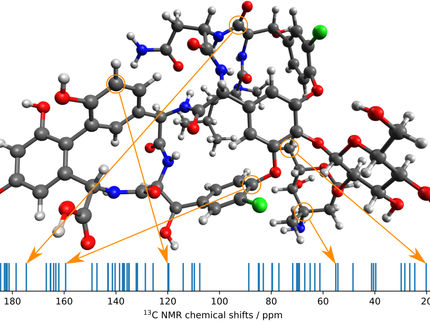 The MPI researchers’ new method in application. A conformer of the vancomycin molecule and its computed 13C NMR spectrum with some peaks assigned to atoms.

Nuclear magnetic resonance (NMR) is one of the most important analytical techniques used in chemical, pharmaceutical, and biomedical research as well as in materials sciences. It provides detailed information about the structures of molecules in solution, which is, however, indirect. Hence, researchers often have to rely on tools from theoretical chemistry in order to properly interpret the complex experimental data. One of the primary sources of information in NMR spectra is the so-called “chemical shift” that exists for each atom in a molecule and depends on its surroundings. Quantum chemists simulate the chemical shift for each atom, in order to receive the full information content of NMR spectra. However, the methods used so far repeatedly reached their limits.

The combination of experiment and new theoretical methods leads to insights that would not have been accessible by other means. However, scientists often face a dilemma: efficient methods such as density functional theory - the workhorse of theoretical chemistry – regularly provide insufficient accuracy. High-accuracy wavefunction methods, in turn, require far more computational resources and their scope is restricted to molecules with only a few atoms – far too small for successful applications in pharmacy or biomedical research.

Researchers from the Department of Molecular Theory and Spectroscopy at the MPI für Kohlenforschung have now developed a new approach that brings a breakthrough. Their wave function method is based on the so-called domain based local pair natural orbital (DLPNO) framework, a concept developed by Frank Neese. In a recently published article, Stoychev et al. report how they succeeded in accurately calculating chemical shifts for systems with hundreds of atoms. Their new method saves computational time and opens up interesting perspectives for users, because in many areas of chemistry, the interpretation of NMR spectra is part of daily business.