Researchers reveal another secret of photosynthesis 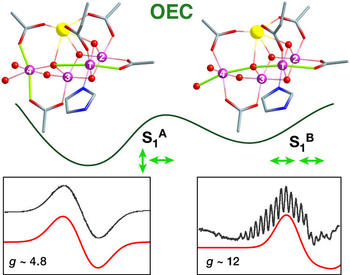 Green hydrogen is often said to be “the petroleum of tomorrow”. For a climate-neutral energy supply in the future, we must turn away from carbon-based sources and harness solar fuels. The road ahead is long and requires, among other things, a precise knowledge of the functional principles of biological photosynthesis, because it acts as a blueprint for chemical processes. The Pantazis group at the Max-Planck-Institut für Kohlenforschung in Mülheim is making seminal contributions to this goal with its studies on water oxidation. The team is researching the structure and mode of action of the biological catalyst that performs water splitting in plants. The researchers have now discovered an unexpected isomerism in the water splitting catalyst, which redefines the understanding of biological water oxidation.

Their report, now published in the journal Angewandte Chemie, focuses on a type of isomerism in Nature’s catalyst that was never observed before. Specifically, using advanced quantum chemistry in combination with electron paramagnetic resonance spectroscopy (EPR), the team discovered that the catalyst does not have a single, unique structure in its "resting" state (the "S1" state), but exists in two isomeric forms. The researchers refer to these structures as "orientational Jahn-Teller isomers". They describe that one of the four manganese ions can be distorted (elongated) in two different directions, and that both directions lead to stable forms of the catalyst that exist simultaneously.

This fact means that depending on the direction of the deformation, advancement to the next step of the catalytic cycle can occur by oxidation of different metal ions, which in turn creates two new forms of the catalyst with different distribution of electrons. As a result, the researchers conclude that the catalytic cycle of natural water oxidation is not a simple sequence of intermediates, but that it is a “double” or “two-stranded” cycle from the beginning, with isomeric components advancing in parallel. "Each intermediate step has two forms, one major and one minor, of which only the minor form may be active. This probably helps the enzyme to avoid unwanted side reactions and to achieve its extremely high selectivity," explains the head of the group, Dr. Dimitrios Pantazis. While it is not yet clear how nature evolved this remarkable mechanistic feature, the discovery by the Mülheim researchers unravels a major mystery of photosynthesis and gives synthetic chemists fresh ideas about stereoelectronic control in catalytic water splitting.