Recycled garnet sand as a source of scandium? 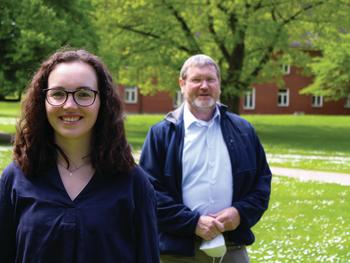 Some call it the "oil of the future." This is because demand for scandium is growing, especially due to its potential as a material for lightweight construction of aircrafts and cars, but also for fuel cells. Concurrently, the supply of this critical raw material in Europe is not secure. Therefore, new ways of extracting the high-tech metal are being intensively sought out. In a recently published pilot study, scientists from Jacobs University Bremen and the German Federal Institute for Geosciences and Natural Resources have now investigated an unusual source of scandium: industrial garnet sand and its waste products.

Worldwide, only 15 to 20 tons of scandium are mined annually as a mining by-product. Most of the deposits are located in China, Australia and Ukraine. Experts anticipate demand to multiply in the coming years. This is mainly due to new scandium-aluminum alloys, which have a low density combined with high tensile strength. Their use can help significantly reduce the weight of aircrafts or automobiles, resulting in lower fuel consumption, emissions and overall costs. Scandium is thus a raw material that is of enormous importance, especially for Bremen's industry.

The light, silvery-white metal does not form its own deposits, but falls off as a by-product in mining. The mineral garnet, whose large crystals are very popular as gemstones in the jewelry industry, has high scandium contents. Smaller garnets are mined as industrial garnet sand and used as abrasives to remove coatings or rust. In the cutting and sandblasting industries, it is recycled several times before it finally ends up as waste and must be disposed of.

Garnet sands from Australia, India and the USA, as well as from commercial suppliers in Germany, were examined by Franziska Klimpel, PhD student in Geosciences at Jacobs University, and geochemist Professor Michael Bau. The results show that garnet sands that have not yet been processed and recycled several times have similarly high concentrations of scandium. The extraction of scandium – but also of rare earths – from garnet sand waste will not be able to eliminate the bottlenecks in supply because of the rather small quantities. It could, however, help reduce its disposal costs, produce less waste, and thus come one step closer to a minimum-waste concept, the researchers conclude. And since scandium is in high demand as a critical raw material for enabling technologies, demand and prices are expected to continue to rise sharply in the near future.