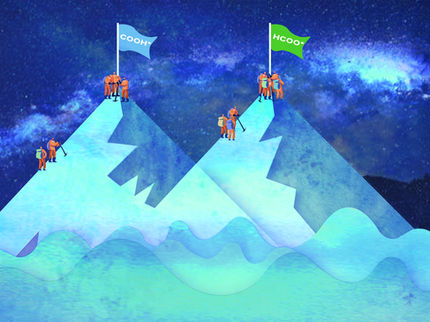 A research group led by Prof. XIAO Jianping from the Dalian Institute of Chemical Physics (DICP) of the Chinese Academy of Sciences (CAS) and their collaborators synthesized a single-atom Pb-alloyed Cu catalyst (Pb1Cu), which showed high activity for the electrochemical CO2 reduction reaction (CO2RR) with a selectivity of 96% to formate and stability of up to 180 h at 100 mA cm-2.

The researchers reported multi-path for CO2 reduction to formate, namely the reaction paths through COOH* and HCOO* intermediates. The reaction phase diagram was built based on the "energy global optimization" approach, describing the activity trend for CO2RR to formate. A double-peak activity trend was obtained owing to the consideration of multi-path.

They found that Cu preferred the COOH* path, resulting in the production of hydrocarbons and oxygenates, which exhibit limited selectivity and activity toward a specific product. However, Pb1Cu preferred the HCOO* path. The optimal HCOO* binding energy in Pb1Cu revealed either high activity or selectivity to formate via CO2RR. The agreement between experimental and theoretical activity trend confirms the reliability of multi-path mechanism.

The Cu site on the Pb1Cu step surface, rather than the single-atom Pb site, showed the highest CO2RR activity toward exclusive formate production. The free-energy diagram with the calculated electrochemical barriers also confirms the formate selectivity.