With the new method, carbon dioxide is transformed into useful porous complexes at room temperature and without high pressure 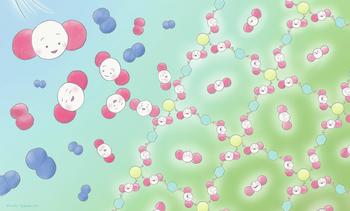 With the new method, carbon dioxide is transformed into useful porous complexes (PCPs/MOFs) at room temperature and without high pressure.

Researchers in Japan have found an energy-efficient way to convert the chief greenhouse gas carbon dioxide (CO2) into useful chemicals. Using the method, CO2 is transformed into structures called metal-organic frameworks (MOFs), suggesting a new and simpler   route to dispose of the greenhouse gas to help tackle global warming.

The research was carried out by scientists at the Institute for Integrated Cell-Material Sciences (iCeMS), Kyoto University, and colleagues, and the results are published in the Journal of the American Chemical Society.

“Taking the CO2 released from fossil fuel combustion and converting the gas into valuable chemicals and materials is a promising approach to protect the environment. But because CO2 is a very inert and stable molecule, it is difficult to get it to react using conventional conversion processes,” says Satoshi Horike, a chemist at iCeMS who led the study. “Our work demonstrates an easier approach that can be run at a much lower temperature and pressure. This should make reactions that use CO2 easier to produce  and more popular.”

The Japanese team targeted MOFs because they have a wide range of uses, including as biosensors and catalysts. Further, because MOFs are porous and can hold large amounts of gas, they show promise as storage devices for sustainable hydrogen fuel.

To run the reaction, the researchers bubbled CO2 at a temperature of 25°C and a pressure of 0.1 MPa through a solution with an organic molecule called piperazine, in what chemists call a “one pot” procedure. The MOF emerged quickly as a white microcrystalline powder that could be collected and dried. Analysis of its structure using X-ray and nuclear magnetic resonance spectroscopy confirmed the conversion had taken place as planned.

The MOFs had a high surface area even though they were made from more than 30% CO2 by weight – properties that make them suitable as functional materials for many applications.

The researchers now plan to see how they could use the reaction to convert CO2 directly from industrial fumes, such as those released by coal and gas-fired power stations.

“Direct utilization of CO2 is challenging, but it will potentially save a lot of energy that is required for the capture and separation of the gas,” Horike said. “The emission of CO2 by fossil fuel combustion must be reduced and regulated to protect the environment. Our method here is a potential clue to help solve some important environmental problems.”