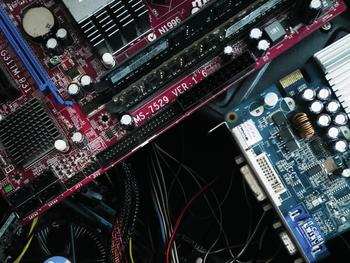 Manufacturers rely on rare earth elements, like neodymium, to create strong magnets used in motors for electronics including hybrid cars, aircraft generators, loudspeakers, hard drives and in-ear headphones. But mineral deposits containing neodymium are hard to reach and are found in just a few places on Earth.

With rising need for neodymium from several industries, attention has turned to recycling the elements found in old computers and printed circuit boards, otherwise known as electronic waste, to meet demand. But separating the valuable elements from other minerals and components found in e-waste proves to be a challenge.

In a recent paper in the Chemical Engineering Journal, Amir Sheikhi, assistant professor of chemical engineering and biomedical engineering, at Penn State, details a new nanotechnology to separate neodymium using plant cellulose, which is found in paper, cotton and pulp. Patrictia Wamea, a former member of Sheikhi’s lab who graduated in May with a master of science degree, co-authored the paper and earned the Penn State Department of Chemical Engineering's annual Best Paper Award in fall 2021 for her contributions.

In the process, hairy cellulose nanocrystals, nanoparticles derived from cellulose fibrils, bind selectively to neodymium ions, separating them from other ions, such as iron, calcium and sodium, according to Sheikhi. The nanoparticles are known as “hairy” due to cellulose chains attached to their two ends, which perform critical chemical functions.

To do this, the researchers negatively charged the hairy layers of the nanoparticles in order to attract and bind with the positively charged neodymium ions, resulting in particle aggregation into larger pieces that can then be effectively recycled and reused.

“The process is effective in its removal capacity, selectivity and in its speed,” Sheikhi said. “It can separate neodymium in seconds by selectively removing the element from some of the tested impurities.”

Current rare earth element recycling processes are environmentally detrimental, according to Sheikhi. They often use highly acidic conditions to extract the elements in chemical reactions. Sheikhi’s process is environmentally friendly due to its use of cellulose, which is an inexpensive renewable resource. The traditional mining process is dangerous and expensive, with harmful environmental impacts from open-pit mining.

“Using cellulose as the main agent is a sustainable, cost-effective, clean solution,” Sheikhi said. “Using this process, the United States will be able to compete with other giants like China to recover rare earth materials and independently produce them.”

China is the leading exporter of neodymium, according to Sheikhi, exporting more than 70% of the world’s supply of the material.

In addition to e-waste, rare earth elements like neodymium can be extracted from industrial wastewater, mining tails and permanent magnets that are no longer in use. In the future, Sheikhi said he hopes the cellulose-based adsorption process can be applied to those sources as well.

“This contribution to rare earth recycling will have a strategic and economically-viable impact on several industries,” Sheikhi said. “The more neodymium we recycle, the more we can manufacture electric and hybrid vehicles and wind turbines, leading to less strain on the environment.”