"The material we synthesized is a hermaphrodite: for the first time, it forms a bridge between crystalline and amorphous, i.e. completely disordered, structures" 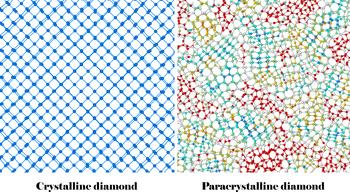 Researchers at the University of Bayreuth, together with partners in China and the USA, have for the first time produced a carbon material that does not have the strictly ordered structures of a crystal, but is not amorphous either. It is paracrystalline diamond with unique optical, mechanical and thermophysical properties. The material offers important clues for understanding non-crystalline materials as well as for the targeted synthesis of other new carbon materials. The international team presents its discovery in Nature.

Diamond is an extraordinarily hard material that forms naturally under extremely high pressures in the Earth's interior. It is composed of carbon atoms that form a three-dimensional crystalline lattice structure. Within this structure, each carbon atom has four covalent bonds. The four electrons involved in these bonds are distributed among the orbitals of the atom in a characteristic manner. Therefore, the state in which the carbon atoms of a diamond are located is also called "sp3 hybridization". Diamond exists in many crystal forms, among which the most familiar are cubic diamond (CD) and hexagonal diamond (HD). However, synthesis of non-crystalline diamond has proven technically difficult, limiting our understanding of its structure, properties and synthesis mechanism.

A research group led by Prof. Dr. Tomo Katsura at the Bavarian Research Institute of Experimental Geochemistry and Geophysics (BGI) has therefore been pursuing the goal of synthesizing millimeter-sized non-crystalline diamond using their recently developed ultrahigh-pressure technique in a large-volume multi-anvil press (MAP). At a pressure of 30 gigapascals and a temperature of more than 1,300 degrees Celsius, they succeeded: in the state of sp3 hybridization, the carbon atoms formed a large-scale non-crystalline structure in which regularly structured units can be identified.

"The new material can be described as a paracrystalline diamond, which differs from all previously known structural variations of diamond. It has a non-amorphous structure in which the carbon atoms are arranged partly in cubes, partly in hexagons, and partly in irregular structures. The unusual physical properties of the new material are non-directional and expected to further advance the study of high-pressure materials," says first author Dr. Hu Tang of the Bavarian Research Institute of Experimental Geochemistry and Geophysics (BGI), a research centre of the University of Bayreuth.

"The material we synthesized is a hermaphrodite: for the first time, it forms a bridge between crystalline and amorphous, i.e. completely disordered, structures. It will stimulate materials research to look specifically for other new materials in this intermediate range,” says Prof. Dr. Tomo Katsura, professor of high-pressure geoscience at BGI.

The paracrystalline diamond was synthesized on a high-pressure press at BGI. The analysis of its structures and properties involved both experiments under high pressures and temperatures and elaborate computer simulations. The Bayreuth scientists cooperated closely with research partners in China and the U.S., in particular with Dr. Huiyang Gou at the Center for High Pressure Science and Technology Advanced Research in Beijing, Prof. Dr. Ming-Sheng Wang at Xiamen University, China, and Prof. Howard Sheng at George Mason University in Fairfax.