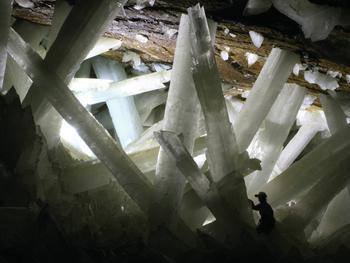 Anhydrite crystals in the Naica mine, Mexico

The better the results of the crystallisation process of materials can be controlled and predicted, the greater the chances of producing crystals that have specific characteristics and allow material properties to be optimised. Scientists at the Bundesanstalt für Materialforschung und -prüfung (BAM) in Berlin have presented new findings on crystal structure, which have been published in the journal PNAS of the National Academy of Sciences of the United States.

Crystals are commonly regarded as the epitome of perfect order - a notion that has even led to them being attributed magical powers. Their orderly structure suggests that their growth also occurs in a very regular and orderly manner. In recent years, however, studies have challenged this "classical" view, and it is now considered likely that the growth of some crystalline materials can also occur in other ways.

To shed light on this question, a team of BAM researchers intensively analysed anhydrite crystals from Mexico and their growth history. They used crystals from the famous Naica mine in northern Mexico for their investigations. Natural caverns of the ore mine contain crystals that have grown over many millennia and are therefore particularly informative for crystallographers.

In their investigations, the scientists took a closer look at defects in the crystal samples in the nanometre to millimetre range and mapped the internal structure of the mineral in detail. These analyses showed that misalignment at the nanoscale spreads over length scales, eventually leading to the formation of voids inside the crystal that can even measure several tens of microns or more. They also found that these misalignment defects come from a so-called "seed of imperfection", leading to a macroscopic single crystal whose fragments do not fit together inside - even if the mineral appears perfect on the outside. The team thus came to the insight that misalignments on the nanoscale are amplified a million-fold during the growth process.

This new insight adds decisively to the concept of non-classical nucleation and crystalline growth processes. It is of great relevance for the development and production of new and improved materials.