By tweaking the emission mechanism and the molecules used, researchers improved the performance of organic glow-in-the-dark materials by tenfold 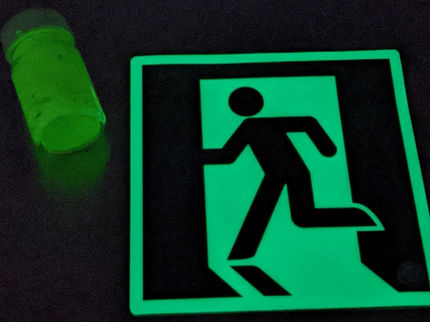 Glow in the dark materials are utilized worldwide for emergency signs, watches, and paint.

Glow-in-the-dark materials are utilized worldwide for emergency signs, watches, and paint. This useful characteristic fuels a global market worth approximately US$400 million. But the inorganic crystals that are currently needed to generate this ability to a high level of performance require rare-earth metals and fabrication temperatures of over 1000 degrees Celsius. Now, writing in Nature Materials, researchers from the Okinawa Institute of Science and Technology Graduate University (OIST) and Kyushu University, both in Japan, have developed a method to generate a glow-in-the-dark light using the more-readily available organic materials.

“Not only are organic materials much more available and easier to work with than inorganic materials but they are also soluble, which has the potential to diversify and expand the use of glow-in-the-dark objects, as the characteristic could be added to inks, films, and textiles,” stated Prof. Chihaya Adachi, director of the Center for Organic Photonics and Electronics Research (OPERA), Kyushu University. “Another important application is their potential use in bioimaging, which could have a myriad of benefits for health science.”

In 2017, researchers showed, for the first time, that two organic materials could create a glow-in-the-dark effect. This was a great success and published in Nature. However, the performance was almost 100 times weaker than with the inorganic varieties. In fact, the researchers had to use an ultraviolet light to generate the emissions, had to go into a dark room to see the light, and could not expose the samples to oxygen. Now, the researchers have produced a better outcome when they progressed from a method with two components to a method with three components and changed the molecules they used. The result was emissions that lasted for over one hour at room temperature, a tenfold improvement from the previous work.

“It’s a four-stage process to create the glow-in-the-dark effect—charge transfer, separation, recombination, and, finally, emissions,” explained Prof. Ryota Kabe, who leads OIST’s Organic Optoelectronics Unit. “Within the molecules, electrons are nestled in holes. An important part of the process is separating the electrons from the holes. When the two come back together, it generates the glow.”

However, in this new work, the researchers did several things differently. Firstly, they used molecules that ensured the holes were the things that moved rather than the electrons. This hole diffusion system reduced the probability of the molecules reacting with the air so ensured the samples would glow whilst exposed to oxygen. Secondly, the researchers added in the third component—a hole trapper, which kept the electron and the hole separated for longer, allowing more holes to build up and increasing the resulting emissions period. And finally, they used molecules that required less energy to move between the different steps of the process, ensuring that the whole process took less energy and allowing the emissions to be generated in visible light, rather than just ultraviolet light.