Frozen in the spotlight: Scientists develop catalyst that turns off when illuminated 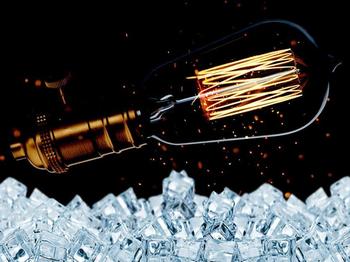 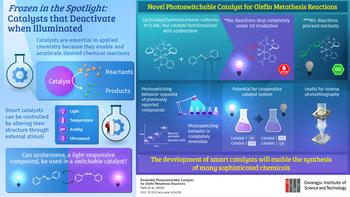 Gwangju Institute of Science and Technology

Catalysts are compounds that enable and accelerate desired chemical reactions without themselves degrading and are pivotal in virtually all of applied chemistry. Over the past few decades, many researchers have sought to develop so-called ‘smart’ catalysts to facilitate the synthesis of sophisticated chemicals. In general, the reactivity of smart catalysts can be controlled by applying an external stimulus, such as by lowering the temperature or increasing the acidity of the medium, making them much more versatile tools than conventional catalysts.

In a recent effort to bring a new smart catalyst to the table, scientists from the Gwangju Institute of Science and Technology in Korea focused on a peculiar organic molecule called azobenzene. This compound undergoes a reversible change in structure when illuminated with light of a certain frequency. Even though this property had been already exploited to design light-sensitive polymers and proteins, very few have explored its potential for designing smart transition-metal catalysts. Thus, the research team, led by Professor Sukwon Hong, tried introducing azobenzene into cyclic(alkyl)(amino)carbene-ruthenium (CAAC-Ru), an established catalyst widely used in olefin metathesis reactions for the production of drugs, cosmetics, and other complex chemicals. Their study was published in ACS Catalysts.

They strategically modified CAAC-Ru so that the active ruthenium site would be either more or less exposed to the reactants depending on the shape adopted by the inserted azobenzene group. In this way, they produced a pair of photoswitchable catalysts with a twist, as Prof. Hong explains: “In contrast with previously reported photo-responsive catalysts for which light turns on the catalytic reaction, our catalysts exhibit the opposite behavior; that is, they deactivate when illuminated with ultraviolet (UV) light, offering a new mode of photoswitching.” The team also demonstrated the reversibility of the photoswitching mechanism through further experiments, showing that the reactions can be repeatedly turned on and off by simply switching the UV light source.

Using light to activate or deactivate a catalyst is convenient because light is both noninvasive and remarkably easy to manipulate with high resolution in time and space. Therefore, the developed catalysts can be leveraged to efficiently turn on a desired chemical reaction only when needed and exactly where one wants it. This is crucial for applications such as photolithography, where chemical reactions are used to create microscopic patterns on thin films using chemical masks. Another interesting application would be the design of a cooperative catalyst system using two different photoswitchable catalysts—one that activates with light and one with the opposite behavior—to help in the controlled production of complex substances. “In the long term, the development of smarter catalysts will unlock much more sophisticated synthesis mechanisms for producing chemicals that improve people’s daily life,” concludes Prof. Hong.

Only time will tell what smart uses we will find for such smart catalysts!