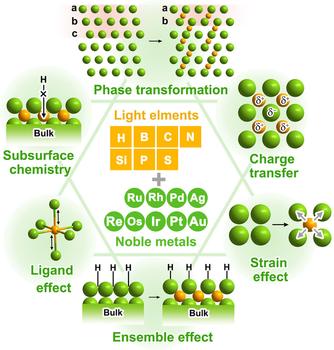 Noble metals have been widely used as heterogeneous catalysts because they easily stand out with high activity and selectivity for many reactions of both scientific and industrial interest. At least a century ago, some light alloying elements with small atomic radii are known to easily permeate into the interstitial location of metal lattice. The catalytic performance of noble metals has also been found to be highly sensitive to a low amount of light elements (e.g., H, C and B) in some cases. These catalysts show some uniqueness as compared with traditional metal-metal alloy catalysts, which brings about novel effects in geometric and electronic modifications of noble metals for optimization of catalytic properties.

Compared with the modification of noble metal catalysts with transition metals, alloying noble metal catalysts with light element atoms has received relatively little attention in earlier studies. The significant roadblocks to extensively study light element implanted noble metal catalysts include the difficulty of accurately controlling and directly observing light alloying elements because of their small atomic size, low concentration, and non-uniform distribution, which limits the ability to establish direct structure-activity relationships. In the recent twenty years, considerable progress has been made in rational design of light atoms in noble metals for modulating the catalytic activity. The rapid process of advanced characterization methods provides powerful tools for directly observing the light atom positions and deeply understanding their structural modifications to the parent metals. In addition, the great development of computational chemistry makes it possible to rapidly identify novel catalysts and reveal the roles of interstitial light elements in promoting catalytic abilities.

Recently, a research team led by Prof. Xiaoxin Zou from Jilin University, China presents a general overview of the recent advances regarding modification of noble metals with light alloying elements for various catalytic reactions, and in particular for energy-related applications. The types, location, concentration and ordering degree of light atoms as major factors functioned in noble metal-based catalysts are summarized, with emphasis on how they can be rationally controlled to promote activity and selectivity. The synthetic strategies developed to incorporate light elements, as well as the theoretical and experimental methods for understanding the alloying effects are highlighted. The diverse array of ligh alloying elements (including H, B, C, N, and others) in various noble metals are further summarized. Current challenges and future perspectives on the development of highly efficient noble metal based catalysts modified with light elements are also discussed.