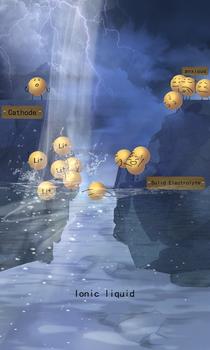 The addition of an ionic liquid to the cathode material fills structural voids and provides a better interface with the solid electrolyte.

Researchers from Tokyo Metropolitan University have developed a new quasi-solid-state cathode for solid-state lithium metal batteries, with significantly reduced interfacial resistance between the cathode and a solid electrolyte. By adding an ionic liquid, their modified cathode could maintain excellent contact with the electrolyte. Their prototype battery also showed good retention of capacity. Though finding the best ionic liquid remains challenging, the idea promises new directions in solid lithium battery development for practical applications.

Lithium-ion batteries have become ubiquitous, finding a place in our smartphones, laptops, power tools, and electric vehicles. But as we look for better solutions with higher energy density, scientists have been turning to solid-state lithium metal batteries. Li metal batteries potentially have much higher energy density than their Li-ion counterparts. They are seen as the future of batteries, powering vehicles and grids on massive scales.

However, technical issues keep solid-state lithium metal batteries from making their way into demanding applications. A major one is the design of the interface between electrodes and solid electrolytes. Electrolytes in Li-ion batteries are usually liquid and highly flammable, posing a safety hazard. That’s why people have been trying to use a solid-state electrolyte instead. However, it is difficult to achieve good contact between electrodes and solid electrolytes. Any surface roughness on either side leads to high interfacial resistance, which plagues battery performance. There has been some work looking at the design of the solid electrolyte, but cathode design remains an open issue.

A team led by Prof. Kiyoshi Kanamura of Tokyo Metropolitan University have been developing new ways of improving the contact between the cathode and solid-state electrolyte in solid-state lithium metal batteries. Now, they have succeeded in creating a quasi-solid-state lithium cobalt oxide (LiCoO2) cathode which contains a room-temperature ionic liquid. Ionic liquids consist of positive and negative ions; they can also transport ions. Importantly, they can fill any tiny voids at the cathode/solid electrolyte interface. With the voids filled, the interfacial resistance was significantly decreased.

The team’s method has other benefits too. Ionic liquids are not only ionically conductive but almost non-volatile and usually non-flammable. They also have minimal effect on the slurry from which the cathode is formed, leaving the manufacturing process virtually untouched. The team demonstrated a prototype battery made with their quasi-solid-state cathode and a solid “garnet” electrolyte (referring to its structure), which showed good rechargeability, with 80% capacity retention after 100 charge/discharge cycles at an elevated temperature of 60°C. Further study also revealed an optimal ionic liquid content of 11wt%.

Issues remain, like finding a better ionic liquid that doesn’t degrade as easily. However, the team’s new paradigm promises exciting new directions for research into solid-state lithium metal batteries, with the potential to bring them out of the lab, and into our lives.