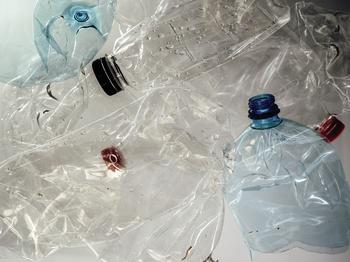 A Northwestern University research team is the first to demonstrate that a material called a metal-organic framework (MOF) is a stable and selective catalyst for breaking down polyester-based plastic into its component parts.

Only three things are needed: plastic, hydrogen and the catalyst. An important bonus is that one of the component parts the plastic is broken down into is terephthalic acid, a chemical used to produce plastic. With the Northwestern method, it isn’t necessary to go all the way back to oil and the expensive and energy-intensive production and separation of xylenes.

“We can do a lot better than starting from scratch when making plastic bottles,” said Omar Farha, a professor of chemistry in the Weinberg College of Arts and Sciences. He is the corresponding author of the study. “Our process is much cleaner.”

The researchers chose a zirconium-based MOF called UiO-66 because it is easy to make, scalable and inexpensive. Yufang Wu, the study’s first author and a visiting graduate student in Farha’s group, used the plastic that was most handy: the plastic water bottles her colleagues in the lab had discarded. She chopped them up, heated the plastic and applied the catalyst.

“The MOF performed even better than we anticipated,” Farha said. “We found the catalyst to be very selective and robust. Neither the color of the plastic bottle or the different plastic the bottle caps were made from affected the efficiency of the catalyst. And the method doesn’t require organic solvents, which is a plus.”

A class of nano-sized materials, MOFs have been widely investigated because of their highly ordered structures. Farha has studied MOFs for more than a decade and previously showed they can be used to destroy toxic nerve agents. In the current study, Farha said, MOFs act in much the same way — breaking an ester bond to degrade polyethylene terephthalate (PET).  This plastic is one of the most popular consumer plastics worldwide.

“We’ve been using zirconium MOFs to degrade nerve agents for years,” Farha said. “The team then wondered if these MOFs could also degrade plastic even though the reactions and mechanism are different. That curiosity led to our recent findings.”

“This research helps to address long-standing challenges associated with plastic waste and opens up new areas and applications for MOFs,” Farha said.

MOFsare made of organic molecules and metal ions or clusters which self-assemble to form multidimensional, highly crystalline, porous frameworks. To picture the structure of a MOF, Farha said, envision a set of Tinkertoys in which the metal ions or clusters are the circular or square nodes and the organic molecules are the rods holding the nodes together.

In addition to being easy to make, scalable and inexpensive, another advantage of UiO-66 is that the MOF’s organic linker, terephthalic acid (TA), is what you get when breaking down plastic.