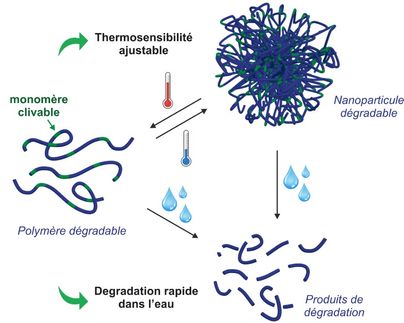 These new polymers, which may be heat-sensitive, are rapidly degraded by water.

Although plastics are very versatile in their uses, they pose a major problem: their degradation. Most of them take a long time to decompose in nature. In a new study published in Nature Communications, a research team from the CNRS and the University of Paris-Saclay has developed new polymers that degrade in water in one week, a record time.

Vinyl polymers, commonly called "plastics", are materials that are found everywhere. They are extremely interesting both for their ease of synthesis and for their great diversity in terms of architecture and functionality. However, their non-degradability causes significant environmental problems and strongly limits their use in biomedical applications.

Using a polymerization technique that allows the design of macromolecules with a controlled and homogeneous architecture, the team of Julien Nicolas, a CNRS researcher at the Institut Galien Paris-Saclay (CNRS/Université Paris-Saclay), has synthesized a polymer material that is very easily degradable. By inserting a brittle monomer into polyacrylamide, a polymer commonly used in many industrial sectors, it can, depending on the nature of the added monomer, either become soluble in water or present a solubility that can be adjusted according to the temperature, especially around that of the human body.

How degradable are they? In water, they can degrade by more than 70% within a week, compared to several months or even years for current reference biodegradable polymers, such as PLA or PCL for example.

Due to the characteristics of these new polymers and their ease of synthesis, the research team believes that they could be used to deliver drugs by formulating these polymers as thermosensitive nanoparticles capable of solubilizing at body temperature. Such chemistry should also make it possible to prepare degradable surfactants for water treatment by flocculation, which is a widely used process in water treatment plants.

Note: This article has been translated using a computer system without human intervention. LUMITOS offers these automatic translations to present a wider range of current news. Since this article has been translated with automatic translation, it is possible that it contains errors in vocabulary, syntax or grammar. The original article in French can be found here.