Researchers succeed in synthesizing a molecule that should not actually exist 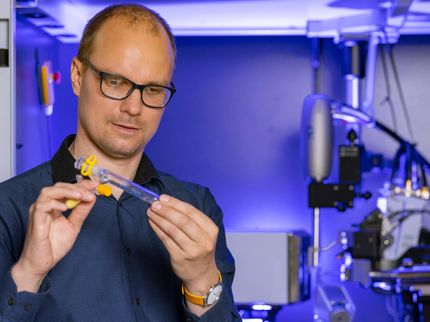 Prof. Dr. Robert Kretschmer, professor of Inorganic Chemistry at Chemnitz University of Technology, examines crystals in front of a diffractometer.

How many atoms can an aromatic ring have if it contains only two electrons? The answer has recently been changed: five! For the first time, a team from chemistry has succeeded in synthesizing and describing a five-membered aromatic compound - an important class of substances in chemistry - by combining experiment and theory. They have thus achieved what had been attempted for decades and had been considered impossible in the meantime. The research groups led by chemistry professor Dr. Robert Kretschmer from the Chemnitz University of Technology, Dr. Oliver Dumele from the Humboldt University Berlin and chemistry professor Dr. Florian Weigend from the Philipps University in Marburg report on their findings in the journal "Angewandte Chemie International Edition".

Aromatic compounds do not necessarily have to be fragrant

"The term aromatic is usually associated with the odor of a compound. In chemistry, however, it also stands for compounds that form a ring in which electrons can be distributed. This makes the rings more stable, which is why it is estimated that around two-thirds of the chemical compounds known today are fully or partially aromatic," explains Kretschmer.

"Aromaticity is one of the most fundamental concepts in chemistry and can be traced back to the German chemist August Kekulé. Since his seminal work in 1865, researchers have been trying to find a general definition and continue to discover new types of aromaticity. For a molecule to be considered aromatic, it must distribute at least two electrons across the ring. In most cases, however, there are considerably more, ranging between six and, so far, a maximum of 162 electrons. While the record for the maximum number of electrons has regularly been raised, it was previously assumed that the minimally required two electrons can only stabilize rings with a maximum of four atoms. This is because the larger a ring gets, the fewer additional electrons are available per atom, which is why the stabilizing effect becomes smaller and smaller.

The team led by Prof. Dr. Robert Kretschmer, who recently took over the professorship of Inorganic Chemistry at Chemnitz University of Technology, has now succeeded in shifting this boundary. They synthesized a compound that contains a planar ring of five gallium atoms. "When we saw the crystal structure, we were quite impressed," says Kretschmer, "as the fact that the ring is flat and that the bonds within the ring have similar spacing are already clear indications of the aromatic character of the molecule." Spectroscopic studies then provided further evidence of its aromatic nature. In cooperation with the research groups of Oliver Dumele in Berlin and Florian Weigend in Marburg, the new molecule was also investigated computationally. The result: "The compound is aromatic, albeit only weakly, but this can be expected if two electrons have to be distributed over five ring atoms," says Kretschmer.

Next, the researchers in Berlin, Chemnitz and Marburg want to study the reactivity of the new compound in more detail and use it for the synthesis of novel complexes.