The ‘cool’ catalyst for a sustainable revolution in industrial chemistry 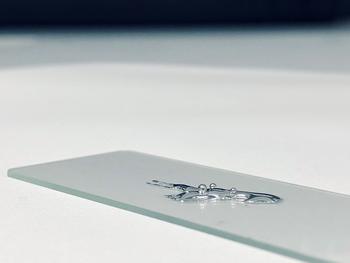 Liquid gallium and three solid beads of platinum, demonstrating the dissolution process of platinum in gallium described in the research paper 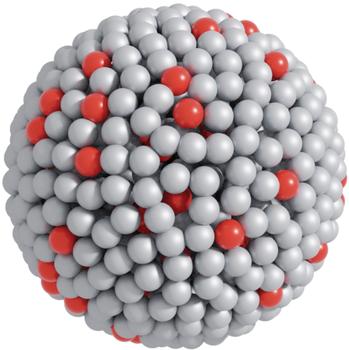 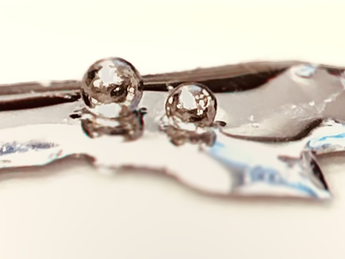 Liquid gallium and platinum beads in close up.

Researchers in Australia have been able to use trace amounts of liquid platinum to create cheap and highly efficient chemical reactions at low temperatures, opening a pathway to dramatic emissions reductions in crucial industries.

When combined with liquid gallium, the amounts of platinum required are small enough to significantly extend the earth’s reserves of this valuable metal, while potentially offering more sustainable solutions for CO2 reduction, ammonia synthesis in fertiliser production, and green fuel cell creation, together with many other possible applications in chemical industries.

These findings, which focus on platinum, are just a drop in the liquid metal ocean when it comes to the potential of these catalysis systems. By expanding on this method, there could be more than 1,000 possible combinations of elements for over 1,000 different reactions.

Platinum is very effective as a catalyst (the trigger for chemical reactions) but is not widely used at industrial scale because it’s expensive. Most catalysis systems involving platinum also have high ongoing energy costs to operate.

Normally, the melting point for platinum is 1,700°C. And when it’s used in a solid state for industrial purposes, there needs to be around 10% platinum in a carbon-based catalytic system.

It’s not an affordable ratio when trying to manufacture components and products for commercial sale.

That could be set to change in the future, though, after scientists at UNSW Sydney and RMIT University found a way to use tiny amounts of platinum to create powerful reactions, and without expensive energy costs.

The team, including members of the ARC Centre of Excellence in Exciton Science and the ARC Centre of Excellence in Future Low Energy Technologies, combined the platinum with liquid gallium, which has a melting point of just 29.8°C – that’s room temperature on a hot day. When combined with gallium, the platinum becomes soluble. In other words, it melts, and without firing up a hugely powerful industrial furnace.

For this mechanism, processing at an elevated temperature is only required at the initial stage, when platinum is dissolved in gallium to create the catalysis system. And even then, it’s only around 300°C for an hour or two, nowhere near the continuous high temperatures often required in industrial-scale chemical engineering.

Contributing author Dr Jianbo Tang of UNSW likened it to a blacksmith using a hot forge to make equipment that will last for years.

“Other people have tried this approach but they have to run their catalysis systems at very high temperatures all the time.”

To create an effective catalyst, the researchers needed to use a ratio of less than 0.0001 platinum to gallium. And most remarkably of all, the resulting system proved to be over 1,000 times more efficient than its solid-state rival (the one that needed to be around 10% expensive platinum to work)

The advantages don’t stop there – because it’s a liquid-based system, it’s also more reliable. Solid-state catalytic systems eventually clog up and stop working. That’s not a problem here. Like a water feature with a built-in fountain, the liquid mechanism constantly refreshes itself, self-regulating its effectiveness over a long period of time and avoiding the catalytic equivalent of pond scum building up on the surface.

Dr Md. Arifur Rahim, the lead author from UNSW Sydney, said: “From 2011, scientists were able to miniaturize catalyst systems down to the atomic level of the active metals. To keep the single atoms separated from each other, the conventional systems require solid matrices (such as graphene or metal oxide) to stabilize them. I thought, why not using a liquid matrix instead and see what happens.

The mechanism is also versatile enough to perform both oxidation and reduction reactions, in which oxygen is provided to or taken away from a substance respectively.

The UNSW experimentalists had to solve some mysteries to understand these impressive results. Using advanced computational chemistry and modelling, their colleagues at RMIT, led by Professor Salvy Russo, were able to identify that the platinum never becomes solid, right down to the level of individual atoms.

“What we found is the two platinum atoms never came into contact with each other,” she said.

“They were always separated by gallium atoms. There is no solid platinum forming in this system. It’s always atomically dispersed within the gallium. That’s really cool and it’s what we found with the modelling, which is very difficult to observe directly through experiments.”

Surprisingly, it’s actually the gallium that does the work of driving the desired chemical reaction, acting under the influence of platinum atoms in close proximity.

Exciton Science Associate Investigator Dr Andrew Christofferson of RMIT explained how novel these results are: “The platinum is actually a little bit below the surface and it’s activating the gallium atoms around it. So the magic is happening on the gallium under the influence of platinum.

“But without the platinum there, it doesn’t happen. This is completely different from any other catalysis anyone has shown, that I’m aware of. And this is something that can only have been shown through the modelling.”

The ARC Centre of Excellence in Exciton Science