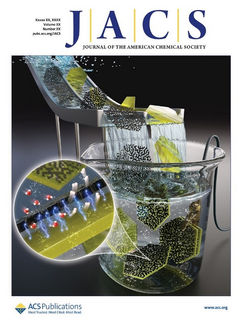 The paper published as the supplementary cover in the Journal of the American Chemical Society.

Ang butter bread, made by layering butter and red bean spread, creates a new flavor by combining the softness of butter and sweetness of red beans. Hydrogen-generating catalysts can also create synergistic effects when different materials are layered with their unique properties. Recently, a Korean research team has developed a technology to enhance the hydrogen generation efficiency by flattening platinum (Pt) over the surface of NiFe-layered double hydroxide (LDH).

Platinum combines well with hydrogen and is often regarded as the best catalyst for hydrogen generation. However, because the water decomposition ability of platinum is poor, research has been conducted to improve this ability by combining platinum with iron and nickel hydroxide.

Professor In Su Lee team has already synthesized a sandwich-type hybrid material in which two-dimensional (2D) NiFe hydroxide nanoplates are sandwiched between porous 2D platinum nanoplates. This material was prepared via an inventive way of growing a platinum layer of ~1 nm on the surface of NiFe hydroxide with a thickness of several nanometers (nm; 1 nm = 1 billionth of a meter).

In this study, a method for synthesizing the platinum layer by separate thinning was used. This was done to overcome the limitation of the uneven growth of platinum layer on the NiFe hydroxide surface.

The researchers ensured that both the upper and lower crystal planes of platinum grew as a flat surface in a confined 2D nanospace to react more effectively with iron and nickel hydroxide. In this catalyst, a complementary effect occurs between NiFe hydroxide and platinum, which are closely attached at a wide interface.

In this study, the activity of the developed catalyst is 11.2 times higher than that of the conventional catalyst material (20wt%-Pt/C) and its function was stable for a long time. This result, which improved the hydrogen generation efficiency through an innovative catalyst synthesis method, is expected to greatly contribute to the future catalyst field.

Professor In Su Lee said, “This catalyst shows the highest level of activity and stability among catalyst materials for alkaline water electrolysis and is expected to greatly increase the generation of green hydrogen, which is considered as the most important low carbon–energy source.”