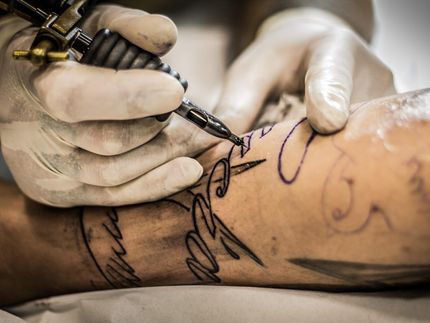 From life-like faces to elaborate nature scenes, tattoos are a true art form. Although people have decorated their bodies for millennia for ceremonial and religious reasons, many people today adorn themselves with these images as a form of self-expression. But the inks used for tattoos are unregulated in the U.S., resulting in products whose components are largely a mystery. Now, researchers have analyzed almost 100 inks and report that even when these products include an ingredient label, the lists often aren’t accurate. The team also detected small particles that could be harmful to cells.

This research was presented at the fall meeting of the American Chemical Society (ACS).

“The idea for this project initially came about because I was interested in what happens when laser light is used to remove tattoos,” says John Swierk, Ph.D., the project’s principal investigator. “But then I realized that very little is actually known about the composition of tattoo inks, so we started analyzing popular brands.”

Swierk and undergraduates in his laboratory interviewed tattoo artists to see what they knew about the inks they use on their customers. The artists could quickly identify a brand they preferred, but they didn’t know much about its contents. “Surprisingly, no dye shop makes pigment specific for tattoo ink,” Swierk explains. “Big companies manufacture pigments for everything, such as paint and textiles. These same pigments are used in tattoo inks.” He also notes that tattoo artists must be licensed in the locales where they operate for safety reasons, yet no federal or local agency regulates the contents of the inks themselves.

Tattoo inks contain two parts: a pigment and a carrier solution. The pigment could be a molecular compound such as a blue pigment; a solid compound such as titanium dioxide, which is white; or a combination of the two compound types such as light blue ink, which contains both the molecular blue pigment and titanium dioxide. The carrier solution transports the pigment to the middle layer of skin and typically helps make the pigment more soluble. It can also control the viscosity of the ink solution and sometimes includes an anti-inflammatory ingredient.

Swierk’s team at Binghamton University (State University of New York) has been investigating the particle size and molecular composition of tattoo pigments using a variety of techniques, such as Raman spectroscopy, nuclear magnetic resonance spectroscopy and electron microscopy. From these analyses, they have confirmed the presence of ingredients that aren’t listed on some labels. For example, in one case ethanol was not listed, but the chemical analysis showed it was present in the ink. The team has also been able to identify what specific pigments are present in some inks.

“Every time we looked at one of the inks, we found something that gave me pause,” Swierk says. “For example, 23 of 56 different inks analyzed to date suggest an azo-containing dye is present.” Although many azo pigments do not cause health concerns when they are chemically intact, bacteria or ultraviolet light can degrade them into another nitrogen-based compound that is a potential carcinogen, according to the Joint Research Centre, which provides independent scientific advice to the European Union.

In addition, the team has analyzed 16 inks using electron microscopy, and about half contained particles smaller than 100 nm. “That’s a concerning size range,” says Swierk. “Particles of this size can get through the cell membrane and potentially cause harm.”

After the researchers run a few more tests and have the data peer reviewed, they will add the information to their website “What’s in My Ink?” “With these data, we want consumers and artists to make informed decisions and understand how accurate the provided information is,” says Swierk.