Synthesis at the touch of a button

Almost as simple as making coffee 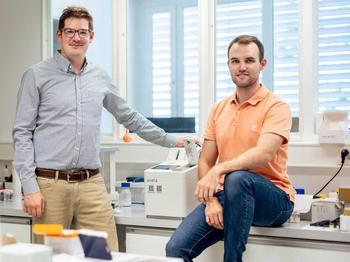 Benedikt Wanner (left) and Guillaume Coin with the compact machine that enables chemical syntheses at the touch of a button.

In many chemical laboratories, routine chemical syntheses are performed on a daily basis, which takes up a lot of time. ETH spin-​off Synple Chem wants to simplify this with a device that is almost as easy to use as a capsule coffee machine.

It’s been a while since bouillon cubes were made in Kemptthal near Winterthur. The sprawling site of the former Maggi factory is now home to numerous start-​up companies that – like Julius Maggi back then – want to conquer the world with their products.

Benedikt Wanner, too, set up shop here a good year and a half ago with his ETH spin-​off Synple Chem. Directly above a small chocolate factory, he has rented laboratory and office space where the Synple team can refine their products, assemble new devices and service machines that have already been sold.

For Wanner, relocating the business to Kemptthal from ETH’s Hönggerberg campus, where he was still able to work in the company’s early days, almost felt like moving out of his parents’ home as a young student: “You leave the familiar comforts of home and suddenly you have to take care of a lot of things yourself,” he says. “It was a tough time, but on balance it was a positive experience because relocating gave us new freedoms.”

Does chemistry really have to be so complicated?

Wanner earned his doctorate under Jeff Bode, Professor of Organic Chemistry at ETH Zurich. “For my dissertation, we developed a chemical synthesis reaction that was very effective, but time-​consuming and complicated, too, and required the use of toxic substances,” Wanner recalls. “As a result, it wasn’t too popular with researchers.”

Wanner asked himself whether chemistry really had to be so complicated. Together with Bode, he considered how to automate typical routine tasks. Ideally, the synthesis of a new substance should be as simple as making a capsule coffee: insert pod, press button, done.

In pharmaceutical research today, certain reactions are indeed used on a daily basis and always proceed in the same way. Automating these routine tasks would save a lot of time – and it would make work easier, especially when they call for toxic substances that must be handled with a great deal of care.

Practically no time at all

Synple Chem now offers just such a device: one that makes chemical synthesis as easy as capsule coffee. The first step is to place the selected starting product in a container and put it into the machine. Then, depending on the desired synthesis, insert a four-​part cartridge containing the required additional reagents. A few presses of a button on the display starts the process, leaving the rest of the work to the machine for the next two or three hours.

The process isn’t quite as simple as making coffee, Wanner admits, because chemical synthesis isn’t about water and coffee powder. Instead, it usually involves several substances that have to be added in a clearly defined sequence. But overall, the machine is designed to be remarkably easy to use.

The first prototype Wanner and his team created can still be seen on the company’s website. Compare it to today’s device and it’s plain how much progress has been made since the company was founded in 2016. “But without the ETH Zurich Pioneer Fellowship, I would never have been able to follow this path,” Wanner states. “No investor would have given me money based on the original trial system.”

Today, the company can offer a total of twelve different syntheses as ready-​made products. “Our goal is to add one or two new reactions to the range every year,” explains Guillaume Coin, who serves as research manager for the ETH spin-​off as part of a project funded by the Swiss Innovation Agency (Innosuisse). Wanner is convinced that the approach will find a place on the market. “Our vision is that in future, every chemistry lab will have a machine like this,” he says, outlining his expansion plans.

The advantage of the device is that it takes the burden off the chemists who previously performed this routine work, so they can devote that time to other tasks instead. Wanner can understand laboratory workers’ initial concern that this takes work away from them. “But if we want this country to keep pace with low-​wage countries, we have to become more efficient,” he says, “so I don’t think we’re putting jobs at risk with our product.”

Wanner has already won several business competitions with his idea, and he managed to get new investors on board in 2019, shortly before the outbreak of the coronavirus crisis. The young company’s next round of financing is due soon; this will finance the remaining expansion steps. “We want to link our instruments to chemical databases to make it easier for users to search for new substances,” Coin explains. And Wanner adds: “Our devices work equally well all over the world and additives have the same composition everywhere. This makes it easy to compare data from different labs and to match them with the information in existing databases. That’s another way we’re helping researchers to further optimise the search for new substances and develop drugs at lower cost.”