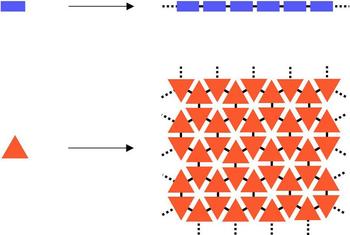 Swiss scientists have created a minor sensation in synthetic chemistry. The team of scientists from ETH Zurich and Empa, the Swiss Federal Laboratories for Materials Science and Technology, succeeded for the first time in producing regularly ordered planar polymers that form a kind of «molecular carpet» on a nanometer scale.

Back in 1920 at ETH Zurich, the chemist Hermann Staudinger postulated the existence of macromolecules consisting of many identical modules strung together like a chain. His concept was initially greeted with mockery and incomprehension from his fellow chemists. But Staudinger was to be proved right (and eventually even awarded the Nobel Prize in Chemistry in 1953): today the macromolecules described as polymers are known as plastics, and by 1950 one kilogram of them was already being produced per capita worldwide. Today, more than ninety years after Staudinger’s discovery about 150 million tons of plastics are manufactured every year – a gigantic industry delivering products that our daily lives can hardly do without. A research group led by ETH Zurich scientists A. Dieter Schlüter and Junji Sakamoto has now succeeded in making a decisive breakthrough in the synthetic chemistry of polymers: they have for the first time created two-dimensional polymers.

Polymers are formed when small single molecules known as monomers join together by chemical reactions like the links of a chain to form high molecular weight substances. The question remained as to whether polymers can only polymerize linearly, i.e. in one dimension. Although graphene counts as a naturally occurring representative of a two-dimensional polymer – planar layers of carbon with a honeycomb-like pattern – it cannot be synthesized in a controlled way. In order to develop a synthetic chemistry that generates two-dimensional molecules the ETH chemists had to first and foremost create oligofunctional monomers in such a way that they join together purely two-dimensionally instead of linearly or even three-dimensionally. Polymers of this kind must have three or more covalent bonds between the regularly repeating units. The scientists had to find out which bonding chemistry and environment was most suitable for producing this kind of «molecular carpet».

They decided to do the synthesis in a single crystal, i.e. a crystal with a homogeneous layer lattice. PhD student Patrick Kissel successfully used this to crystallize special monomers in layered hexagonal single crystals. The monomers he generated are photochemically sensitive molecules, for which such an arrangement is energetically optimum. When irradiated with light with a wavelength of 470 nanometers, the monomers polymerized in all the layers of the crystal. To separate the individual layers from one another the researchers boiled the crystal in a suitable solvent. Each layer represents a two-dimensional polymer.

The fact that the team really had succeeded in producing sheet-like polymers with regular structures was shown by special studies in a transmission electron microscope (TEM) carried out by Empa researcher Rolf Erni and Marta Rossell from ETH Zurich (who meanwhile is also working at Empa’s Electron Microscopy Center). «These two-dimensional polymers are extremely sensitive towards irradiation. It’s really tricky to not destroy their structure during the TEM measurements, which made the analyses a real tough nut to crack», says Erni. Diffraction experiments at minus 196oC – the condensation point of nitrogen – and high-resolution images at a low electron dose allowed the Empa scientists to eventually provide proof that the cross-linked molecules indeed exhibit a regular two-dimensional structure.

The polymerization method that was developed is so gentle that all the monomer’s functional groups are also preserved at defined positions in the polymer. Says Sakamoto, «Our synthetically manufactured polymers are not conductive like graphene, but on the other hand we would be able to use them for example to filter the tiniest molecules.» In fact in the regularly arranged polymers there are small defined holes with a diameter in the sub-nanometer range. Moreover, tiny hexagons in the polymers, formed by benzene rings with three ester groups, can be removed by a simple hydrolytic process. This would form a «sieve» with an ordered structure suitable for the selective filtration of molecules.

However, before the researchers can think about practical applications, the task now is to characterize the material’s properties. First of all they must find a way to produce larger amounts and even larger sheet sizes. The size of the crystals is currently only 50 micrometers. Sakamoto stresses that «those, however, are already enormous degrees of polymerization at a molecular level.»