The Innovation Prize Berlin Brandenburg 2012 was awarded to LUM

Perfect or poor? The award-winning Adhesion Analyser LUMiFrac will find out 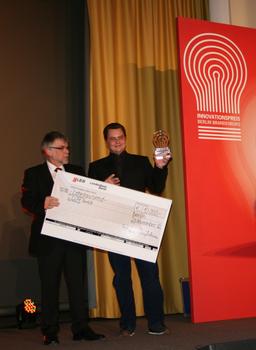 Prof. Dr. Dietmar Lerche (left) and Uwe Rietz (both LUM GmbH) during the award ceremony in Berlin on 23 November 2012.

The Innovation Prize Berlin Brandenburg 2012 was awarded to LUM GmbH for the new Adhesion Analyser LUMiFrac®.

Adhesive and tensile strength of composite materials, multi-layer films and bonded parts are determined online by the award-winning LUMiFrac®. Starting as an idea for a more simple and objective determination of adhesion properties, it now revolutionises as multi-patented measuring technology the testing of composite material for an indefinite number of applications. The characterization of lacquer coats and composite material in automotive and aircraft industries, of thin multilayer foils in packaging industry or of thinnest metal coatings on optical glasses and decorative plastics, e.g. eyeglasses, mirrors and taps, to name a few.
In contrast to several existing industrial test procedures, often specific for just one company, the new analytical centrifuge LUMiFrac® features the first universal test instrument without any sample clamping device giving adhesive and tensile strength as traceable physical quantity in N/mm². Moreover, now up to 8 specimen are simultaneously measured in a special rotor of a centrifuge, i.e. comparable under identical conditions. This not only results in higher reproducibility but also reduces the measuring time for 8 samples by approximately 75%. The physical principle of operation is based on the programmable change/increase of the rotor speed. It increases the applied force onto the specimen up to the breaking point. During rotation a measuring electronics, directly placed onto the rotor, sends position coded signals, allowing the transmission of the time and rotor speed of breakage to the PC-based SEPView® software. SEPView® automatically calculates the corresponding force of breakage and enables offline analysis and automatic comparison for up to 24 samples.

Prof. Dr. Lerche, Managing Director of LUM GmbH, is proud of the prize: “The development was for LUM itself a big challenge in a way, that in our own company six engineering and natural sciences collaborated to master the complex functionalities. On the other hand external cooperations, especially with Federal Institute for Materials Research and Testing (Berlin, Germany), Eppendorf AG (Hamburg and Leipzig, Germany), Steingross GmbH (Berlin, Germany), Ingenieurbüro Dr.-Ing. Heinz Schuster (Borsdorf, Germany) and Easesolutions (Singapore) significantly contributed to the successful transformation from the idea to the final product. Last but not least, the funding of research and development by German Federal Ministry of Economics and Technology (ZIM-single project) and the supervision by the project executing organisation Euronorm GmbH were important preconditions for the success.
In this spirit, the innovation prize is due to the entire LUM team and to our co-operation partners. Sincere thanks are given to all.“