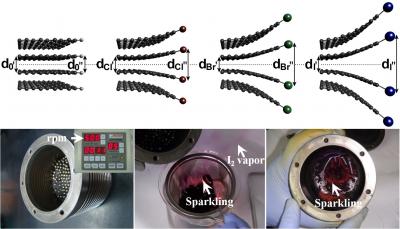 A schematic representation for the edge expansions of XGnPs is seen in the top images. The bottom images contain ball-mill capsule containing the pristine graphite and stainless steel balls.

Fuel cell technology has come a long way since the early days in the Apollo space program. Certainly the idea of running a car on pure hydrogen is an exciting prospect as the only emissions will be pure water.

But how much will you be willing to pay for this car? Current fuel cell technologies, need platinum (Pt) catalysts which are costly and insufficient for industry demand.

Beside the high cost of platinum, another major drawback for commercialization of fuel cell technology is the sluggish oxygen reduction reaction (ORR) at cathode. Although, Pt and its alloys have been considered to be the most reliable cathodic ORR electrocatalysts in fuel cells, it also suffers from methanol crossover/carbon monoxide (CO) poisoning effects and poor long-term operation stability.

Now, there is an alternative. The research team have created a low cost metal-free catalyst which can be scaled up for industrial and commercial use. They synthesized a series of edge-selectively halogenated (Cl, Br and I) graphene nanoplatelets (XGnPs) by ball-milling graphite flake in the presence of chlorine (Cl2), bromine (Br2), or iodine (I2), respectively.

The resultant XGnPs were tested as cathode electrodes of fuel cells and revealed remarkable electrocatalytic activities for ORR with higher tolerance to methanol crossover/CO poisoning effects and longer-term stability than those of the original graphite and commercial Pt/C electrocatalysts. This makes XGnPs a possible replacement for platinum (Pt) in fuel cells, bringing down the cost and increasing the likelihood of commercialization.

"We made metal-free catalysts using an affordable and scalable process," said Prof. Liming Dai of Case Western Reserve and one of the paper's authors. "The catalysts are more stable than platinum catalysts and tolerate carbon monoxide poisoning and methanol crossover."

Although extensive efforts have been devoted to the development of non-precious metal-based electrocatalysts, their practical application is still far from being a reality due to their limited electrocatalytic activity, poor cycle stability, and sometimes environmental hazard.

These novel metal-free electrocatalysts were synthesized by ball-milling at high speed rotation (500 rpm) using stainless steel balls, generating sufficient kinetic energy to cause bond cleavages of the graphitic C-C framework. As a result, active carbon species formed at the broken edges of graphite, which were sufficiently reactive to pick up halogens in the sealed ball-mill capsule.