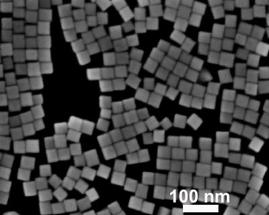 These are palladium nanocrystals.

More efficient catalytic converters on autos, improved batteries and more sensitive gas sensors are some of the potential benefits of a new system that can directly measure the manner in which nanocrystals adsorb and release hydrogen and other gases.

The technique, which was developed by Vanderbilt University Assistant Professor of Chemical and Biomolecular Engineering Rizia Bardhan, is described in a paper published online by the journal Nature Materials.

In the last 30 years, there has been a tremendous amount of research studying nanocrystals – tiny crystals sized between one to 100 nanometers in size (a nanometer is to an inch what an inch is to 400 miles) – because of the expectation that they have unique physical and chemical properties that can be used in a broad range of applications.

One class of applications depends on nanocrystals' ability to grab specific molecules and particles out the air, hold on to them and then release them: a process called adsorption and desorption. Progress in this area has been hindered by limitations in existing methods for measuring the physical and chemical changes that take place in individual nanocrystals during the process. As a result, advances have been achieved by trial-and-error and have been limited to engineered samples and specific geometries.

"Our technique is simple, direct and uses off-the shelf instruments so other researchers should have no difficulty using it," said Bardhan. Collaborators in the development were Vanderbilt Assistant Professor of Mechanical Engineering Cary Pint, Ali Javey from the University of California, Berkeley and Lester Hedges, Stephen Whitelam and Jeffrey Urban from the Lawrence Berkeley National Laboratory.

"The fluorescence effect is very subtle and very sensitive to differences in nanocrystal size," she explained. "To see it you must use nanocrystals that are uniform in size." That is one reason why the effect wasn't observed before: Fabrication techniques such as ball milling and other wet-chemical approaches that have been widely used produce nanocrystals in a range of different sizes. These differences are enough to mask the effect.

To test their technique, the researchers studied hydrogen gas sensing with nanocrystals made out of palladium. They choose palladium because it is very stable and it readily releases adsorbed hydrogen. They used hydrogen because of the interest in using it as a replacement for gasoline. One of the major technical obstacles to this scenario is developing a safe and cost-effective storage method. A nanocrystal-based metal hydride system is one of the promising approaches under development.

"In the past, people thought that the size effect was limited to sizes less than 15 to 20 nanometers, but we found that it extends up to 100 nanometers," said Bardhan.

The researchers also determined that the adsorption/desorption rate was determined by just three factors: pressure, temperature and nanocrystal size. They did not find that additional factors such as defects and strain had a significant effect as previously suggested. Based on this new information, they created a simple computer simulation that can predict the adsorption/desorption rates of various types and size ranges of nanocrystals with a variety of different gases.