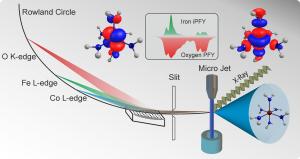 This sketch demonstrates the principle of measurement which enables to address atom-specific and state-dependent emission of photons. With the help of first principles theory the spectral features can be associated with molecular orbitals.

How exactly atoms and molecules in biochemical solutions or at solid-liquid interfaces do interact, is a question of great importance. Answers will provide insights at processes in catalysts, smart functional materials and even physiological processes in the body, which are essential for health. Until now, scientists could have a look at these interactions by methods of spectroscopy, but it was hard to distinguish the many different interactions, which take place simultaneously.

A groundbreaking work by HZB-scientists could now change the game. Emad Flear Aziz and his team provides a new tool, which enables scientists to get a “fingerprint” of the interactions on the atomic scale. In collaboration with the group of theoretical physicist Oliver Kühn from the University of Rostock these fingerprints can be interpreted and linked to specific chemical interactions, thus allowing direct insight in what happens in the former “black box”. The results are now published online in Physical Review Letters.

“Basically we are looking at how atoms and molecules interact in biochemical materials in solution”, says Professor Dr. Emad Flear Aziz, leader of the Young Investigator Group for Functional Materials in Solution at the HZB and Professor at Freie Universität Berlin. Their now published work is based on a discovery by Aziz’ team made three years before: They then analyzed samples with x-ray spectroscopy and observed the disappearance of photons at some specific photon energy. These results have been replicated by other teams worldwide. To explain this effect, Aziz and colleagues proposed a “dark channel mechanism”, which should provide information about binding processes and interactions between atoms or molecules. This explanation stirred a big debate among scientists.

Now they have gathered arms with theoretical physicists around Professor Oliver Kühn from the University of Rostock in order to get a coherent picture:  Aziz’ team sharpened the experimental methods further using a new approach to high resolution spectroscopy. In order to understand, how the spectral findings are linked to binding and structural processes inside the sample, Oliver Kühn and his postdoc Sergey Bokarev provided a theoretical tool, based on ab initio calculations of energy levels inside the molecules.  “We can map all electronic states in the systems we probe, and we can distinguish those which are involved in building bonds with neighbors from those which are not involved”, Aziz explains. Metaphorically speaking: if the interacting molecules produce a sort of party chatter, the scientists are now able to listen to specific conversations. They are convinced that these new tools will bring deeper insights into the chemistry of life.