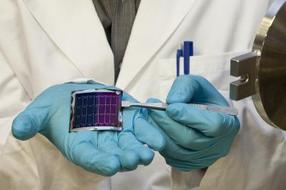 For many years scientists and engineers have been trying to provide low-cost solar energy by developing a cheap solar cell that is both highly efficient and at the same time simple to build, enabling it to be mass produced. Now, the team led by Empa researcher Ayodhya N. Tiwari has made a major leap forward: the researchers are presenting a new manufacturing technique for CIGS solar cells, in which tiny quantities of sodium and potassium are incorporated into the CIGS layer. The special treatment alters the chemical composition of the complex sandwich structure – thereby altering its electronic properties, as confirmed by various methods including detailed electron microscope investigations.

With this technique, the Empa team has again been able to significantly increase the energy conversion efficiency from sunlight into electricity using CIGS thin film solar cells on flexible plastic foils – to a new record level of 20.4%, representing a marked improvement over the previous record of 18.7% established by the same team in May 2011. This finally enables CIGS cells to compete with the best polycrystalline silicon cells. Until recently, the Empa CIGS cells were the most efficient in the world; at the end of October, though, a German research team at the Zentrum für Sonnenenergie- und Wasserstoff-Forschung (ZSW) in Stuttgart presented CIGS cells with an efficiency of 20.8%, although they use far higher processing temperatures and (rigid) glass as the substrate. The slightly improved record shows that CIGS thin film technologies are a "hot" topic.