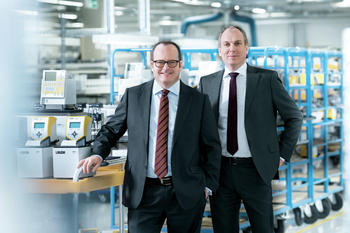 From January 1, 2015, Dr. Gunther Wobser (left) and Dr. Marc Stricker (right) will share the areas of responsibilities of the management.

LAUDA DR. R. WOBSER GMBH & CO. KG has added to its management team with the appointment of Dr. Marc Stricker (43) as Managing Director. The PhD engineer will run the company together with CEO, Dr. Gunther Wobser (44). From January 1, 2015, Dr. Stricker will control the Operations, Research & Development, Information Technology and Quality Management divisions and coordinate international development activities of the four locations. As Chairman of the Management Team, Dr. Gunther Wobser, who has been with the family-run company for almost 20 years now, will be responsible for the Finances & Personnel, Marketing Communications areas, the three divisions of Constant Temperature Equipment, OEM and Heating and Cooling Systems as well as the 11 foreign subsidiaries. In addition, Dr. Wobser, a graduate of Business Administration, will become CEO of the new company, LAUDA Scientific, which will market measuring instruments from 2015 onwards.

Before Dr. Stricker switched to LAUDA on October 1, 2014, he was the CEO of the supplier, Speck Pumpen Walter Speck GmbH & Co. KG near Nuremberg. Prior to that, he worked as Project Director at Viessmann Werke in Allendorf. In addition to his completed Engineering studies from the RWTH Aachen University, which includes a PhD from the Technical Thermodynamics Department, he acquired a Masters in Business Administra-tion from the Friedrich Alexander University of Erlangen-Nuremberg in 2011.