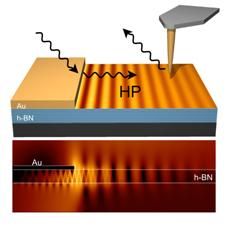 Illustration (top) and simulation (down) of nanoimaging slow nanolight in a thin boron nitride slab are shown. Incident light pulses are converted by a gold (Au) film into slow hyperbolic polariton (HP) pulses propagating in the boron nitride (h-BN) slab. The HPs are traced in space and time by first scattering them with a nanoscale sharp scanning tip and then measuring the time delay between scattered and the incident pulse as a function of tip position.

Researchers at CIC nanoGUNE (Basque Country) in collaboration with colleagues at ICFO - The Institute of Photonic Sciences (Catalunya) have imaged how light moves inside an exotic class of matter known as hyperbolic materials. They observed, for the first time, ultraslow pulse propagation and backward propagating waves in deep subwavelength-scale thick slabs of boron nitride - a natural hyperbolic material for infrared light.

Hyperbolic materials are very special because they behave like a metal in one direction, but like an insulator in the other. Until now, these materials have been used to fabricate complex nanostructures that permit subwavelength-scale imaging, as well as the focusing and controlling of light at the nanoscale. However, in order to fully exploit their potential, it is necessary to study and understand how light behaves inside them.

The work lays the foundations for studying the precise manner in which light travels through complex optical systems at the subwavelength scale in extremely high levels of detail. Such a capability will be vital for verifying that future nanophotonic devices, perhaps with biosensing or optical computing applications, are functioning as expected.

"The difficulty in performing the reported experiments is the extremely short wavelength of light when it is inside a hyperbolic material" explains Ikerbasque Professor Rainer Hillenbrand, leader of the nanooptics group at nanoGUNE. When light moves inside the material - in our case mid-infrared light in a 135 nm boron nitride slab - it travels in the form of what we call a polariton, where the light is actually coupled to the vibrations of the matter itself".

These polaritons can be considered a double-edged sword to the scientists trying to study them. On the one hand, they squeeze light into much smaller volumes than is normally possible. This is helpful for a wide range of applications that require the manipulation of light in tiny spaces, such as detecting and identifying individual molecules. On the other hand, this ultra-high confinement means that special techniques have to be developed to look at their behavior.

Edward Yoxall, who performed the experiments at nanoGUNE along with Martin Schnell, elaborates: "Because the wavelength of a polariton is so small, we cannot use 'conventional' optical equipment, such as lenses and cameras, to image it. Instead, we have to use a special type of microscope." This microscope - a scattering-type scanning near-field infrared microscope - is capable of seeing details 1000 times smaller than a standard infrared microscope, visualizing "objects" of just 10 nanometers.

"But it's not just the spatial resolution that makes tracking polaritons tricky", continues Yoxall. "If we want to see how a polariton moves, we need to detect and track it in both space and time. This can be accomplished by using extremely short flashes of light - or pulses- that are just 100 femtoseconds long." That is an extremely small number; less than one millionth of a millionth of a second. By using these very short flashes in combination with their near-field microscope, the researchers are able to watch the polaritons passing different locations along the boron nitride slab, allowing for measuring their speed.

By using both the space and time information that is gathered during the experiment, the scientists have been able to exactly determine how the polariton was travelling. The time- and space-resolved maps revealed a range of intriguing behaviors of the polaritons, including a dramatic slowing down of the pulse velocity - below 1 percent of the light velocity in vacuum- and a reversal of the direction in which the polariton waves were propagating in relation to the direction of the energy flow.