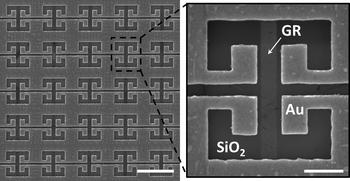 A hybrid metamaterial structure designed in this work consists of an array of metallic (Au) split-ring resonators combined with graphene nano-ribbons placed between metallic elements.

A collaborative international team consisting of two experimental groups, led by Professor Geoffrey Nash from the University of Exeter and Professor Jérôme Faist from the Swiss Federal Institute of Technology in Zurich, and of a theoretical group of Privatdozent Dr. Sergey Mikhailov from the University of Ausgburg, have engineered and investigated a remarkable new hybrid structure, or metamaterial, that possesses specific characteristics that are not found in natural materials.

The team combined nano-ribbons of graphene together with a type of metallic antenna called a split ring resonator. Electrons in graphene are able to oscillate across the ribbon, performing so called plasma oscillations. Electrons in the metallic split-ring elements also oscillate with their own frequency. These two types of oscillations interact with each other, with the interaction strength which can be controlled by the voltage applied between the graphene stripes and the back-side metallic contact. Careful design of these two elements leads to a system in which the hybrid plasma oscillations strongly interact with electromagnetic radiation. As a result, the transmission of radiation through the structure can be controlled and manipulated by the electric voltage applied to it. The new structure can be thus used as a type of the terahertz-wave switch to interrupt, and turn on and off, a beam of this light very quickly.

The operation of this light modulator was demonstrated at the frequencies of several terahertz. The corresponding radiation wavelengths are very long, far beyond what the human eye can see. An important characteristic of the new structure is that it has the effect of focussing the electromagnetic radiation into an area much smaller than its wavelength. This could potentially lead to new ways of undertaking spectroscopic methods with ultra-high resolution.

The novel results obtained by the team could form the basis of a range of technologically important components. They are published in the scientific journal Nature Communications. This research work was carried out within the European FET Open Project GOSFEL, which aims to develop an entirely new laser source for many different applications in security, medicine, telecommunication, gas sensing, and so on. The Augsburg group also investigates nonlinear electrodynamic properties of graphene within another, large European research Program Graphene Flagship, with the goal to use them in different electronic and optoelectronic applications.