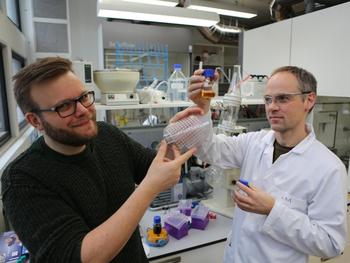 Inventors Thomas Just Soerensen and Bo Wegge Laursen with two components of their newly patented invention. An environmentally sensitive fluorescent dye which emits light when influenced by the surrounding environment and a solid gel matrix which allows fluids to flow freely around the dye. Together the two will make it possible to conduct realtime non-invasive measurements in liquids which must remain sterile.

A new invention will open the doors for an entirely new way of measuring properties within liquids. The invention, a sol-gel matrix, will make it possible to perform measurements that are reliable, incredibly rapid and can be conducted over extended periods of time. The development will be a boon for research and development in the food, pharmaceutical and biotechnology sectors.

Thomas Just Sørensen is an associate professor at the University of Copenhagen chemistry department's Nano Science Center. Together with colleagues Professor Bo Wegge Laursen and Martin Rosenberg, he has taken out the patent DK201370617 (A1) .

Researchers developing new drinking yoghurt, improving upon a vaccine or devising a more effective washing detergent enzyme share a similar dilemma. They must monitor factors such as oxygen content and PH in liquids while trying not to come into direct contact with the liquids to avoid contamination. Using current monitoring technologies, it has been impossible to perform measurements without breaking the sterile barrier on the container. Using the sol-gel based matrix, Thomas Just Sørensen expects to be able to conduct targeted measurements by shining light onto dyes in the solgel-based matrix, and measuring the reflected light.

Over the past decade, Sørensen and Laursen have discovered a range of environmentally sensitive florescent dyes: Dyes which emit light, when influenced by the surrounding environment. The luminescent dyes were perfectly suited to assist with non-invasive measurements. But there was a snag, according to Sørensen.

"Having a dye that is circulating freely in a liquid is not of great help. In and of itself, it would be a contaminant but it would also result in unreliable measurements, when the dye might be anywhere within the fluid. With the sol-gel, we have affixed the dye, while liquid is free to circulate around it," explains Sørensen.

The dyes are affixed inside the translucent gel. The solgel is so porous that the liquid is in constant contact with the dye. The sensitive gel is produced as fingernail-sized flat dots. Within seconds of being immersed in a liquid, the sensors are ready for use. The measurements are taken within seconds as well, and are reliable from measurement to measurement, for weeks at a time. Finally the chemists have incorporated a fourth important property in their invention. This one should prove useful, in new research projects.

"It is straightforward to change dyes in the sol-gel with our method. This means we can easily investigate properties of other new dyes that we invent. In time, that will allow us to develop new sol-gel based sensor dots for measuring just about anything," says Thomas Just Sørensen.

Laursen and Sørensen are in the process of founding a company to supply PH and oxygen sensors based upon their innovation. Sørensen expects the sol-gel based matrix monitors to benefit researchers working in numerous areas where liquids must remain sterile, such as in the biotech, pharmaceutical and food industries.