Electrons with 'no mass' flow with 'no resistance' 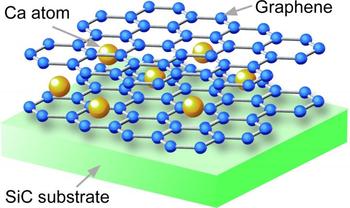 This is the crystal structure of Ca-intercalated bilayer graphene fabricated on SiC substrate. Insertion of Ca atoms between two graphene layers causes the superconductivity. 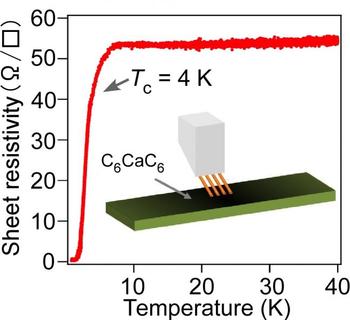 This image shows temperature dependence of electrical resistivity of Ca-intercalated bilayer graphene, measured by the micro four-point-probe method (inset). The resistivity shows a rapid decrease at around 4 K and reaches "zero" at 2 K, showing the emergence of superconductivity.

Graphene is a single-atomic carbon sheet with a hexagonal honeycomb network. Electrons in graphene take a special electronic state called Dirac-cone where they behave as if they have no mass. This allows them to flow at very high speed, giving graphene a very high level of electrical conductivity.

This is significant because electrons with no mass flowing with no resistance in graphene could lead to the realization of an ultimately high-speed nano electronic device.

The collaborative team of Tohoku University and the University of Tokyo has developed a method to grow high-quality graphene on a silicon carbide (SiC) crystal by controlling the number of graphene sheets. The team fabricated bilayer graphene with this method and then inserted calcium (Ca) atoms between the two graphene layers like a sandwich.

They measured the electrical conductivity with the micro four-point probe method and found that the electrical resistivity rapidly drops at around 4 K (-269 °C), indicative of an emergence of superconductivity.

The success in fabricating superconducting graphene is expected to greatly impact both the basic and applied researches of graphene.

It is currently not clear what phenomenon takes place when the Dirac electrons with no mass become superconductive with no resistance. But based on the latest study results, further experimental and theoretical investigations would help to unravel the properties of superconducting graphene.

The superconducting transition temperature (Tc) observed in this study on Ca-intercalated bilayer graphene is still low (4 K). This prompts further studies into ways to increase Tc, for example, by replacing Ca with other metals and alloys, or changing the number of graphene sheets.

From the application point of view, the latest results pave the way for the further development of ultrahigh-speed superconducting nano devices such as a quantum computing device, which utilizes superconducting graphene in its integrated circuit.