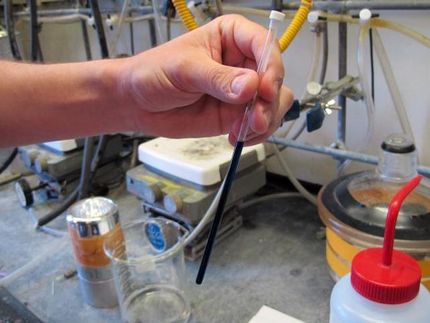 A tube containing newly synthesized diindenoanthracene, or DIAn, is shown in the hand of the University of Oregon's Gabriel E. Rudebusch.

University of Oregon chemists have synthesized a stable and long-lasting carbon-based molecule that, they say, potentially could be applicable in solar cells and electronic devices.

The molecule changes its bonding patterns to a magnetic biradical state when heated; it then returns to a fully bonded non-magnetic closed state at room temperature. That transition, they report, can be done repeatedly without decomposition. It remains stable in the presence of both heat and oxygen.

Biradical refers to organic compounds, known as open-shell molecules, that have two free-flowing, non-bonding electrons. Producing them using techniques to control their electron spin, and thus provide semiconducting properties, in a heated state has been hampered by instability since the first synthetic biradical hydrocarbon was made in 1907.

"Potentially our approach could help to make organic solar cells more efficient than silicon solar cells, but that's probably far in the future," said UO doctoral student Gabriel E. Rudebusch, the paper's lead author. "Our synthesis is rapid and efficient. We easily can make a gram of this compound, which is very stable when exposed to oxygen and heat. This stability has been almost unheard of in the literature about biradical compounds."

The four-step synthesis of the compound -- diindenoanthracene, or DIAn -- and how it held up when tested in superconducting materials were detailed in a proof-of-principle paper. The UO team collaborated with experts in Japan, Spain and Sweden.

The molecular framework for the new molecule involves the hydrocarbon anthracene, which has three linearly fused hexagonal benzene rings, in combination with two five-membered pentagonal rings.

"The big difference between our new molecule and a lot of other biradical molecules that have been produced is those five-membered rings," said co-author Michael M. Haley, who holds the UO's Richard M. and Patricia H. Noyes Professorship in Chemistry. "They have the inherent ability to accept electrons or give up electrons. This means DIAn can move both negative and positive charges, which is an essential property for useful devices such as transistors and solar cells. Also, we can heat up our molecule to 150 degrees Celsius, bring it back to room temperature and heat it up again, repeatedly, and we see no decomposition in its reaction to oxygen. The unique features of DIAn are essential if these molecules are to have a use in the real world."

Haley's lab is now seeking to develop derivatives of the new molecule to help move the technology forward into potential applications.