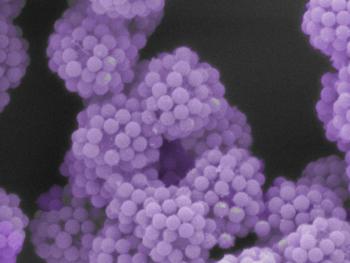 Led by the University of Melbourne the work holds promise for micro and nano scale applications including drug delivery, chemical sensing and energy storage.

"Nano-objects are difficult to manipulate, as they're too tiny to see directly by eye, far too small to hold, and often have incompatible surfaces for assembling into ordered structures," he said.

"Assembling LEGO bricks into complex shapes is relatively easy, as LEGO studs ensure the blocks stick together wherever you want.

"So we used a similar strategy as a basis for assembling nano-objects into complex architectures by first coating them with a universally adhesive material (a polyphenol) so that they resemble the studs on LEGO bricks.

"This allows for a range of nano-objects to stick together around a template, where the template determines the final shape of the assembled structure," Professor Caruso said.

Different materials can be assembled using this approach. This simple and modular approach has been demonstrated for 15 representative materials to form different sizes, shapes, compositions and functionalities.

"Many previous methods have been limited by particle-specific assembly," Professor Caruso said.

"However, this new polyphenol-based particle approach can be adapted to different functions and allows different building blocks to be assembled into super-structures," he said.

The "studs" in the LEGO brick-like structures, known as C/G studs from the polyphenols, provide a superstructuring process for assembling and inter-locking the building blocks using multiple anchor points.

The "C/G studs" on the building block nanoparticles can further interact with a secondary substrate and/or coordinate with metal ions, interlocking the structures.

This provides a platform for the rapid generation of superstructured assemblies with enhanced chemical diversity and structural flexibility across a wide range of length scales, from nanometres to centimetres.