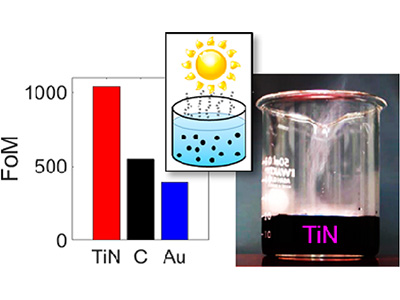 A highly-efficient, nanoparticle-based method for heating water and generating water vapor from sunlight is demonstrated by WPI-MANA scientists.

Solar energy could provide a renewable, sustainable source of power for our daily needs. However, even the most state-of-the-art solar cells struggle to achieve energy conversion efficiency of higher than 30%. While current solar-powered water heaters fare better in terms of energy efficiency, there are still improvements to be made if the systems are to be used more widely.

One potential candidate for inclusion in solar water heaters is “nanofluid,” that is, a liquid containing specially-designed nanoparticles that are capable of absorbing sunlight and transforming it into thermal energy in order to heat water directly. Now, Satoshi Ishii and his co-workers at the International Center for Materials Nanoarchitectonics (WPI-MANA) and the Japan Science and Technology Agency have developed a new nanofluid containing titanium nitride (TiN) nanoparticles, which demonstrates high efficiency in heating water and generating water vapor.

They then exposed each nanofluid to sunlight and measured its ability to heat pure water. The TiN nanofluid had the highest water heating properties, stemming from the resonant sunlight absorption. It also generated more vapor than its carbon-based counterpart. The efficiency of the TiN nanofluid reached nearly 90%. Crucially, the TiN particles were not consumed during the process, meaning a TiN-based heating system could essentially be self-sustaining over time.

TiN nanofluids show great promise in solar heat applications, with high potential for use in everyday appliances such as showers. The new design could even contribute to methods for decontaminating water through vaporization.