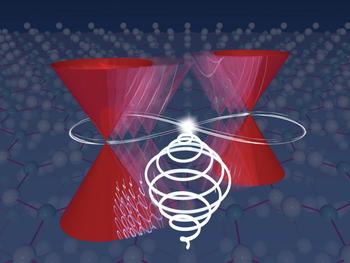 Dancing Weyl cones: When excited by tailored laser pulses (white spiral), the cones in a Dirac fermion material dance on a path (8-shape) that can be controlled by the laser light. This turns a Dirac material into a Weyl material, changing the nature of the quasiparticles in it. One of the cones hosts right-handed Weyl fermions; the other cone hosts left-handed ones.

Studying properties of fundamental particles in condensed matter systems is a promising approach to quantum field theory. Quasiparticles offer the opportunity to observe particle properties that have no realization in elementary particles. In the present study, an international research team led by Angel Rubio from the Max Planck Institute for the Structure and Dynamics of Matter at CFEL in Hamburg and the University of the Basque Country in Donostia-San Sebastián predicted how laser light can be used to create Weyl fermion states in 3D Dirac materials and to switch between Weyl semimetal, Dirac semimetal and topological insulator states on ultrafast timescales. Besides its relevance for fundamental quantum physics, the results might lead to applications in ultrafast switching of material properties.

In the standard model of particle physics, the fundamental particles that make up all matter around us – electrons and quarks – are so-called fermions, named after the famous Italian physicist Enrico Fermi. Quantum theory predicts that elementary fermions could exist as three different kinds: Dirac, Weyl, and Majorana fermions, named after Paul Dirac, Hermann Weyl, and Ettore Majorana. However, despite being predicted almost a hundred years ago, of these three kinds of particles only Dirac fermions have been observed as elementary particles in nature so far. With the discovery of graphene in 2004, however, it was realized that the behaviour of relativistic free particles could be observed in the electronic properties of materials. This sparked the search for materials where these fundamental particles could be observed and only last year the first materials hosting Weyl fermions were discovered. While any known material only hosts one kind of these fermions in its equilibrium state, in the present work it is demonstrated how one can transform the fermion nature within specific materials by using tailored light pulses.

The observation of Dirac fermions in the properties of graphene originates from a complex interaction of the large number of electrons and ions that make up the material. Although each individual electron interacts with its surrounding ions and electrons via electrostatic forces, the particular pattern of carbon ions in graphene’s honeycomb layer structure causes the electrons to behave collectively like massless, free fermions – Dirac fermions. These particles cooperatively forming new particles with different properties are called quasiparticles. The hunt for other materials hosting quasiparticles behaving like fundamental particles has thus focused on the crystal structure of materials so far.

It has now been found, however, that by irradiating a material with a laser, it is also possible to combine a quasiparticle with the photons of the laser field to form a new quasiparticle that, again, can behave fundamentally differently. In particular, the coupling to photons can affect the topology of quasiparticles. Topology is a property of the particles that leads to peculiar properties, for example metallic chiral edge states that form a collisionless one-way quantum highway along the edge of a topological insulator. This chirality, or handedness, is topological in the sense that right-handed and left-handed chiralities are discrete states that cannot be continuously deformed into each other. The 2016 Nobel Prize in Physics was just awarded to Michael Kosterlitz, Duncan Haldane, and David Thouless for the discovery of such topological phases of matter.

Dirac and Weyl fermions differ by their chirality. Just like our left and right hands, Weyl fermions occur in pairs, where one particle is a mirrored version of the other. The two partners are almost identical, yet they cannot be superimposed. Dirac fermions, by contrast, do not have this property.

One approach to create chirality in a material is to drive it with a laser beam. “It was realized about ten years ago that the so-called Floquet theory − a theory for laser-driven systems that oscillate periodically in time − allows us to engineer parameters and symmetries in materials that can change their topology,” explains Michael Sentef, Emmy Noether group leader at the MPSD in Hamburg. Inducing chirality into a Dirac fermion material by combining those fermions with photons from the laser beam to form new quasiparticles can thus transform it into a Weyl fermion material.

“The crucial challenge in this work was to take the ideas of Floquet theory and topology from the conceptual level of model systems to the world of real materials and to demonstrate that such non-equilibrium topological phase transitions can be realized in a materials science context,” says Hannes Hübener, Marie Curie fellow at the University of the Basque Country in San Sebastián and lead author of the work.

From topological stability to ultrafast electronics

In particular, the authors could show how topological protection of the handedness of Weyl fermions arises and can be made more robust the stronger the laser field is. “We realized in our simulations that when we cranked up the field, the two different right- and left-handed Weyl fermions moved further apart from each other in the so-called momentum space, in which quasiparticles live,” says Sentef. “Since right- and left-handed particles are antiparticles of each other, they have to come together to destroy each other. The separation thus protects them from getting destroyed, which means that we achieve topological stability of these quasiparticles.”

The theoretical results suggest that experimentalists should be able to measure the transformation between Dirac and Weyl fermions in ultrafast laser experiments. One way of doing this is to use the photoelectric effect to eject electrons from the laser-driven material, a technique called pump-probe photoemission spectroscopy, which is available at the Max Planck Institute for the Structure and Dynamics of Matter under Otto-Hahn group leader Isabella Gierz and Director Andrea Cavalleri.

Angel Rubio, Director of the MPSD Theory Department, adds: “This work opens exciting new avenues to manipulate the properties of materials and molecules using fundamental light-matter interaction. It paves the way for ultimately controlling their behaviour at the nanoscale and with ultrafast switching cycles.” The scientists even hope that there might be a way to stabilize the light-induced states for longer times while retaining the ability to switch them at terahertz or even faster frequencies. This may enable new ultrafast electronics for superfast computers in the future.