Research pushes concept of entropy out of kilter 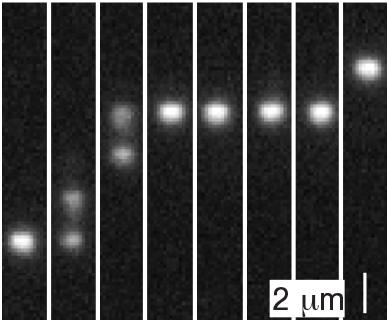 Entropy, the measure of disorder in a physical system, is something that physicists understand well when systems are at equilibrium, meaning there's no external force throwing things out of kilter. But new research by Brown University physicists takes the idea of entropy out of its equilibrium comfort zone.

The research describes an experiment in which the emergence of a non-equilibrium phenomenon actually requires an entropic assist.

"It's not clear what entropy even means when you're moving away from equilibrium, so to have this interplay between a non-equilibrium phenomenon and an entropic state is surprising," said Derek Stein, a Brown University physicist and co-author of the work. "It's the tension between these two fundamental things that is so interesting."

The phenomenon the research investigated is known as "giant acceleration of diffusion," or GAD. Diffusion is the term used to describe the extent to which small, jiggling particles spread out. The jiggling refers to Brownian motion, which describes the random movement of small particles as a result of collisions with surrounding particles. In 2001, a group of researchers developed a theory of how Brownian particles would diffuse in a system that was pushed out of equilibrium.

Imagine jiggling particles arranged on a surface with undulating bumps like a washboard. Their jiggle isn't quite big enough to enable the particles to jump over the bumps in the board, so they don't diffuse much at all. However, if the board were tilted to some degree (in other words, moved out of equilibrium) the bumps would become easier to jump over in the downward-facing direction. As tilt begins to increase, some particles will jiggle free of the washboard barriers and run down the board, while others will stay put. In physics terms, the particles have become more diffusive -- more spread-out -- as the system is moved out of equilibrium. The GAD theory quantifies this diffusivity effect and predicts that as tilt starts to increase, diffusivity accelerates. When the tilt passes the point where all the particles are able to jiggle free and move down the washboard, then diffusivity decreases again.

The theory is important, Stein says, because it's one of only a few attempts to make solid predictions about how systems behave away from equilibrium. It's been tested in a few other settings and has been found to make accurate predictions.

But Stein and his team wanted to test the theory in an unfamiliar setting -- one that introduces entropy into the mix.

For the experiment, Stein and his colleagues placed DNA strands into nanofluidic channels -- essentially, tiny fluid-filled hallways through which the molecules could travel. The channels were lined however with nanopits -- tiny rectangular depressions that create deep spots within the relatively narrower channels. At equilibrium, DNA molecules tend to arrange themselves in disordered, spaghetti-like balls. As a result, when a molecule finds its way into a nanopit where it has more room to form a disordered ball, it tends to stay stuck there. The pits can be seen as being somewhat like the dips between bumps on the theoretical GAD washboard, but with a critical difference: The only thing actually holding the molecule in the pit is entropy.

"This molecule is randomly jiggling around in the pit -- randomly selecting different configurations to be in -- and the number of possible configurations is a measure of the molecule's entropy," Stein explained. "It could, at some point, land on a configuration that's thin enough to fit into the channel outside the pit, which would allow it to move from one pit to another. But that's unlikely because there are so many more shapes that don't go through than shapes that do. So the pit becomes an 'entropic barrier.'"

Stein and his colleagues wanted to see if the non-equilibrium GAD dynamic would still emerge in a system where the barriers were entropic. They used a pump to apply pressure to the nanofluidic channels, pushing them out of equilibrium. They then measured the speeds of each molecule to see if GAD emerged. What they saw was largely in keeping with the GAD theory. As the pressure increased toward a critical point, the diffusivity of the molecules increased -- meaning some molecules zipped across the channel while others stayed stuck in their pits.

"It wasn't at all clear how this experiment would come out," Stein said. "This is a non-equilibrium phenomenon that requires barriers, but our barriers are entropic and we don't understand entropy away from equilibrium."

The fact that the barriers remained raises interesting questions about the nature of entropy, Stein says.

"Non-equilibrium and entropy are two concepts that are kind of at odds, but we show a situation in which one depends on the other," he said. "So what's the guiding principle that tells what the tradeoff is between the two? The answer is: We don't have one, but maybe experiments like this can start to give us a window into that."

In addition to the more profound implications, there may also be practical applications for the findings, Stein says. The researchers showed that they could estimate the tiny piconewton forces pushing the DNA forward just by analyzing the molecules' motion. For reference, one newton of force is roughly the weight of an average apple. A piconewton is one trillionth of that.

The experiment also showed that, with the right amount of pressure, the diffusivity of the DNA molecules was increased by factor of 15. So a similar technique could be useful in quickly making mixtures. If such a technique were developed to take advantage of GAD, it would be a first, Stein says.

"No one has ever harnessed a non-equilibrium phenomenon for anything like that," he said. "So that would certainly be an interesting possibility."