Using a simple, scalable method, a material that can be used as a sensor is developed 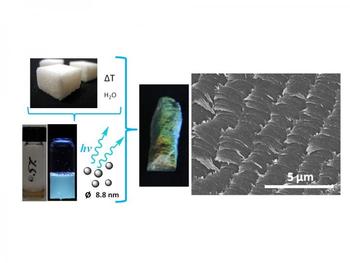 This is an image showing the process to synthesise the new material.

Erlantz Lizundia, a researcher in the UPV/EHU's department of Physical Chemistry and expert in cellulose, started the research during a period of time he spent in Canada. The research group he was in specialised in the helix-shaped organisation of a product extracted from cellulose, cellulose nanocrystals (CNCs). Under specific conditions, the crystals can assume a helical structure, or what is the same, they can form chiral nematic structures when the crystals are organised into ordered layers, and membranes with unique properties can thus be obtained: "The membrane displays a different colour depending on the distance existing between the layers of cellulose nanocrystals that form the helical, or chiral nematic structure. An interaction takes place between the structure and the light and, as a result, the wavelength of the light changes and materials in bright colours are obtained," explained Lizundia. This capacity to change colour displayed by the structure "could prove very useful in enabling these membranes to be used as sensors; for example, when they are put into a humid environment, the structure will swell and the distance between the layers will increase and the colour will change," he added. This effect is known as structural coloration and is very common in nature. The colour of a whole host of animals (snakes, chameleons) and plants is the direct consequence of their supramolecular structure, and contrary to what one may think, is not linked to the presence of pigments. Suitable as metal sensors and for bioimaging purposes

Inserting carbon dots into the chiral nematic structure of the cellulose nanocrystals makes this material particularly suited as a detector for the presence of iron so, as Lizundia explains, "it is very useful for detecting environmental pollution or the presence of metals in the body. I, specifically, studied the material's response to zinc and iron, as they are both present in large quantities in environmental and biological matters. I was able to see that the interaction of the metal ions with the carbon nanoparticles influences the degree of fluorescence emitted by the nanoparticles. The fluorescence diminishes in the presence of iron, whereas it increases in the presence of zinc".

Another possible application of this material could be in bioimaging. In the research conducted, Lizundia only managed to get as far as testing that it does in fact offer this possibility. "I will shortly be embarking on research to go further into this subject and use these nanoparticles to create bioimages". Bioimaging consists of creating images using non-invasive methods in biological processes, such as cell processes, as well as measuring the interaction between molecules in real time in the location where these interactions are taking place.